Last week, I had the privilege of being in Las Vegas, Nevada for the annual Interbike bicycle industry trade show, and made it to the Outdoor Demo in Boulder City on Tuesday.

I started the day off early by arriving around 7:15am in order to get ready for the Tour de Lake Meade. The ride goes from the demo area right in Boulder City, and drops down to the shore of the Lake Meade National Recreation Area. I stopped by the Raleigh tent to pick up a 2013 Raleigh Revenio Carbon 4.0 bike, which the folks at Raleigh Bicycles had generously set aside for me. 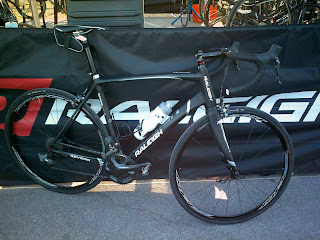 The bike rode like a champ. The Raleigh T700 carbon frame and carbon monocoque fork provided a smooth, yet stiff response. The Shimano Ultegra Di2 electronic drivetrain shifted flawlessly in every direction. Raleigh's RE2P geometry provided an aggressive position that was just upright enough that I'd be comfortable on it for the long haul. The stem was installed with a downward angle, which was fine for this 23-mile ride; the only change I'd probably make if I were to own this bike would be to flip the stem to the upright position for more comfort on 100-mile endurance rides.
The ride itself was quite a kicker. It looked like about 100 or more people showed up; some on demo bikes just like me, and others on their own bikes. Other than a few rollers at the very end by the lake, the ride is all downhill for 11+ miles, then we turned around and rode 11+ miles all UPHILL.

With enough of the road for the day, I turned my attention to the demo's off-road loop. This trail winds around the hills in the desert above Boulder City with intermediate-level terrain interspersed with winding curves, rocks, and loose dirt. There are three sections where there's a steep drop, followed immediately by a steep climb back up to your original level. The third of these dips is notoriously the most difficult, being the steepest, and the dirt gets really loose near the top.
Of course, the first thing I wanted to grab was the new Surly Krampus: 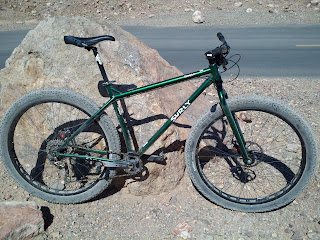 This bike does exactly as it was designed to do--hit the sweet spot between the traction and floatation of a snow bike, with the speed and agility of a traditional 29er mountain bike. I usually ride a Medium frame mountain bike, but there wasn't one available when I showed up at the Surly tent, so I grabbed a Large, but as it turned out, this was ideal for me. I was able to rail the curves, and cleared the infamous third dip in the trail without having to hop off or dab my foot.

The Krampus is named for a mythical Troll-like creature, and even the sound of this bike lives up to the name. As the 3-inch wide tires glide over the dirt, they make a ROAR like I've never heard before. Surly says that the geometry of the bike is designed around a short stem and wide handlebar. The handlebar on this model was very wide, but it had a traditional 90 or 100mm stem, and that felt fine.

Keep an eye on this blog in March, as we will have a full size run (Small, Medium, and Large) of the Surly Krampus complete bikes in stock as soon as they're available!

Before my ride on the Krampus, I stopped by the Pearl Izumi tent, where they had samples of their new Project X off-road shoes. The Project X shoes are designed to provide the stiffness and performance like any high-end carbon-soled shoe, with the slight flexibility and walkability needed for enduro races, adventure touring, and other situations where off-bike running and walking is required. 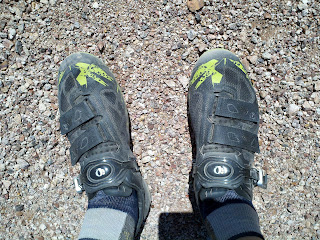 I normally take either a size 44 or 45 shoes, and they were out of 45 at the time, so I went with a 44. During the Krampus excursion, the shoes gave the on-bike performance that you'd expect. I didn't have to test the off-bike performance that much due to the Krampus's sure-footed traction, but walking between the demo tents proved no problem for the shoes to handle, although by the end of the test, my toes started to feel a little cramped, proving just that I really needed the size 45.

Next, I wanted to try out a full-suspension 29er. I've been toying with the idea of getting a new one for myself, and the Giant Anthem X 29er has been on the list of candidates. At the Giant tent, they had an Anthem X 29er 1 available in Large, so I was off to the races. 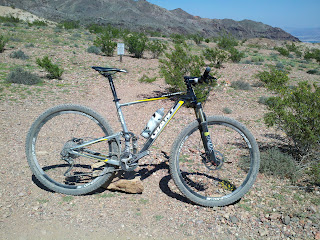 I was blown away by the smoothness of the Giant Maestro suspension on this bike. Even more than on the Surly Krampus, I could hug all the corners tight and fast, and this was the only other bike on which I was able to clear all of the dips in the trail. The Shimano SLX/XT drive train shifted quite fine. Just to provide some unbiased comparison, I also rode a couple of other duallie 29ers from non-CC brands, but the Giant Anthem X 29er remains at the top of the list.

Back at the Surly tent, I caught a glimpse of the Pugsley in the new School Bus Yellow color: 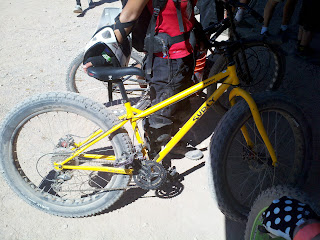 The main change in the Pugsley for this coming year (besides the color) is the switch from Large Marge rims to Marge Lite rims, with the cutout sections, which take about a pound of weight off the complete bike. The other new color, available in December, will be Engine Red.

To show some off-road love to Raleigh, I went and grabbed the Raleigh Talus 29er Carbon Pro and put it through its paces on the loop: 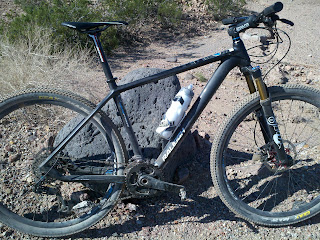 While not quite as plush as a full-suspension bike, if light weight and top performance are your main concerns, then look no further. The carbon frame had point-and-shoot response, the Fox fork smooth things out up front, and the SRAM X.0 drive train shifted like a charm. I cleared all but the third of the dips in the trail; perhaps not so much the fault of the bike, but maybe to the desert heat wearing down on me...

I wanted to try the Surly Moonlander; I had ridden the models we've had in stock in the store before, but never really had a chance to take one on a "real" trail ride. 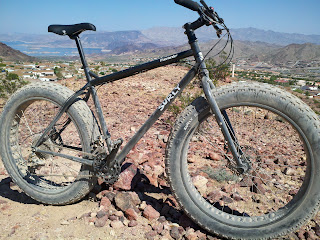 The Moonlander proved to be the trail-crusher that you'd expect. Don't worry or try to finesse this bike around, just let it rumble over whatever the trail throws at you. Maybe I should have finessed it a little bit, though, as about 2/3 of the way around the loop, it started feeling squirrelly, and I realized that the front tire had gone flat. I had to walk it back; I'm not sure how far, but it felt like nearly a mile. By the time I got back to the Surly tent, I was cooked, so I took a break to hang out with the Surly guys and some other demo attendees. 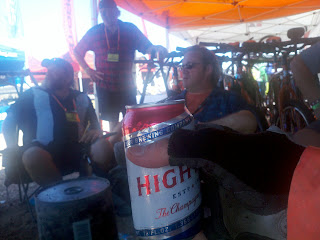 I noticed the row of Surly Troll bikes in the back, looking so lonely and neglected, so I decided to take a quick spin on one. I didn't do the full singletrack loop; I just followed a paved bike trail out a bit to where it crosses the singletrack, and then rode the last couple hundred yards on the singletrack. With the proliferation of 29ers and fat bikes, the Troll has become somewhat of a red-headed step-child in the Surly Bikes world, but there are still many situations that call for a rigid 26-inch wheeled mountain bike (around-the-world touring, anyone?). The Troll handled both the paved trail and the singletrack capably. I find myself wanting one; I have no real need for it, but it's just so...cute! 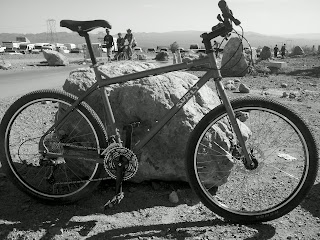 Some Trolls are still available in Orange, but the new colors will be Black and Dark Egg Plant (Purple Nurple).

The last hour of the day I spent back at the Raleigh tent, tooling around the pavement on a couple of their commuter bikes, namely the 2013 Raleigh Misceo Trail i11 and the 2013 Raleigh Tripper. The Misceo Trail i11 builds on the platform of their popular Misceo series, with front suspension and 700x40 hybrid tires, and add an internally-geared 11-speed Shimano rear hub. The bike had the go-anywhere performance and versatility that we've come to expect from the Misceo series, and the 11-speed hub was a simple joy to shift.

The Raleigh Tripper uses the same steel frame and fork as the new-in-2012 Roper and Furly, but mated to a Shimano 3-speed internally geared hub, and a flat handlebar instead of a drop bar. It's oriented to the urban commuter market, for somebody looking for a hip, simple bike, but wants a little more gear options than a fixie or singlespeed. The disc brakes stopped sure, but I found the narrow handlebar to be not to my taste. The integrated stem/handlebar combo doesn't give any options for adjusting the handlebar position, so I see a lot of aftermarket stems and bars being sold to those who choose this bike. Overall, not really my cup of tea, but a fine choice of bike for those who it is.
Posted by Kevin Madzia at 4:00 AM