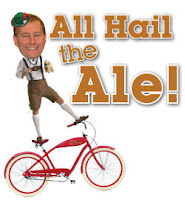 It's time to start planning those beer costumes! Join us to celebrate Cleveland Beer Week on two wheels at Century Cycles’ 3rd Annual All Hail the Ale Night Ride on the Towpath Trail on Saturday, October 20, at 7:30 p.m.


This FREE nighttime bicycle ride will begin at Century Cycles bicycle store in Peninsula (1621 Main Street/Route 303) and will end at the Winking Lizard Tavern next door with the tapping of a special Sierra Nevada beer provided especially for the event. For more information (and to see LOTS of photos of cool beer costumes!), go to www.centurycycles.com/for/CleBeerWeek.


“The All Hail the Ale Night Ride is in tribute to the post-ride beer, a long and sacred tradition in bicycling that we’re proud to celebrate and uphold,” said Scott Cowan, owner of Century Cycles.


Details for Cleveland Beer Week’s only bicycle ride include:

·        Decorate yourself or your bike in tribute to the event theme “All Hail the Ale!” While beer costumes are not required, they are highly encouraged and a special prize will be awarded for Best Costume. Everyone in costume will be entered to win additional prizes donated by Century Cycles, the Winking Lizard and Sierra Nevada Brewing Company.


·        Pedal your bicycle with a crowd of fellow bike-and-beer lovers on a 13-mile nighttime bicycle ride on the Towpath Trail. It will roll out at 7:30 p.m., but plan to arrive earlier to admire your fellow rider’s beer-inspired garb, take a spin on the Blender Bike, and enjoy the pre-ride festivities.


·        At the ride’s halfway point, there will be Oktoberfest-themed snacks – cheese generously provided by MDS Foods in Massillon, sausages, pretzels and other salty delicacies – to fuel the ride back to the Winking Lizard Tavern and make you REALLY thirsty for some good beer.


·         After the ride, Night Riders are invited to the Winking Lizard Tavern in Peninsula for a tapping of a special beer provided especially for the event by Sierra Nevada Brewing Company, one of the pioneers of the craft beer movement in America. Not to be a buzzkill, but there will be no beer (except perhaps root beer) allowed or distributed on the Night Ride until the tapping.


·        Century Cycles will also be making a donation to the silent auction to benefit the Malone Scholarship Fund at BREWzilla, the party that culminates Cleveland Beer Week. For a chance to bid on the bicycle and other auction items donated by local breweries and companies (plus enjoy more amazing beer), attend BREWzilla on October 27. Tickets and info are at www.clevelandbeerweek.org.


In 2010, Century Cycles conducted an online survey to ask Northeast Ohio bicyclists which style of beer they prefer after a bike ride. The overwhelming favorite among the 114 respondents was Ale/Pale Ale/IPA, which garnered 44% of the votes. That was followed by Wheat/Belgian (21%), Porter/Stout (18%), Light Beer (10%), and Lager (7%).


All the pesky details:
While the Night Ride is FREE and requires no advanced registration, Night Riders must sign a waiver before participating and are responsible for the purchase of their own beer and food at the Winking Lizard. This ride is at night, in the dark woods on an un-lit trail. That is why bicycle lights and helmets are REQUIRED. Children under 16 must be accompanied by an adult; young adults under 21 should ignore all the excitement about the beer tapping. Finally, make sure those beer costumes don’t hang or catch in a bicycle’s spokes or chain (falling off your bike tends to ruin the fun) and that you can still wear your bike helmet in costume.