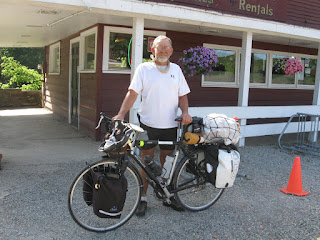 This is Richard Burdyshaw, who just completed his THIRD cross-country bicycle ride on June 12, 2012. He's from Little Rock, Arkansas, but began this latest ride in San Diego, California on March 5.

He followed FIVE different Adventure Cycling Association bike routes: Southern Tier, Grand Canyon Connector, Western Express, TransAmerica, and finally, the Underground Railroad Bicycle Route, which brought him to Peninsula, where he waited for his brother to drive down from Mentor to give him a lift.

Thanks for sharing the memories of your many bike adventures with us, Richard! You can read his bike travel blog at: www.crazyguyonabike.com/doc/burdy

You can also see more photos of bicycle touring travelers who have visited our stores at the Century Cycles Bicycle Touring Photo Gallery.
Posted by Century Cycles at 8:00 AM