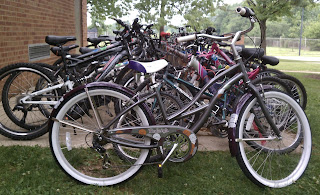 The inaugural Medina Bike To School Challenge sponsored by Century Cycles concluded at Root and Claggett Middle Schools on Tuesday, May 29, with school-wide celebrations of the students’ bicycling accomplishments by Medina’s mayor, school administrators and program organizers and sponsors. Medina middle school students logged 13,171 miles on their bikes and on average 193 students (9.3%) biked each day during the three-week program that ran May 7-25! 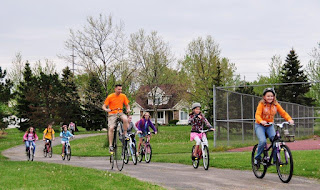 “It’s an honor to congratulate Medina’s students for their bicycling,” said Medina Mayor Dennis Hanwell in his address to the school-wide assembly at Root Middle School. “Bicycling is important for a number of reasons. It’s a great way to be physically active throughout your life and to help the environment by having fewer cars on the roads. We are committed to expanding the bicycling opportunities in Medina and encourage students to keep bicycling.”

Main sponsors Century Cycles bicycle store in Medina and bicycle manufacturer Raleigh Bicycles teamed up to give away two grand prize bicycles, which were won in a random drawing at the Root assembly by 8th grader Logan Usher and 6th grader Truman Karczewski (below). Both boys biked every day of the challenge. 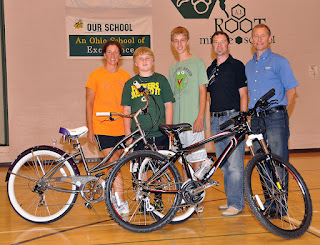 At Claggett Middle School, the grand prize Raleigh bicycles were won by 7th graders Dustin Green and Nate Neuwirth. Dustin biked all but two days, and Nate biked every day of the challenge. 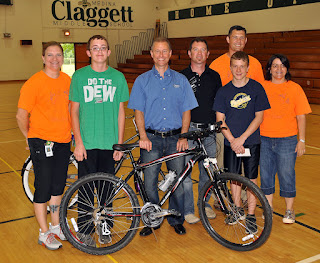 Raleigh Bicycles also gave Claggett and Root Middle Schools $500 each as an award for exceeding their bicycling goals during the challenge, to use for fitness and bicycling programs.

The Medina Bike To School Challenge t-shirt design contest was won by 8thgrade Root Middle School student Zachary Hunter. He won a prize package from Century Cycles, and his winning design (pictured below) is featured on the front of the shirt given by the bike store to every student who biked to school four days or more during the challenge. 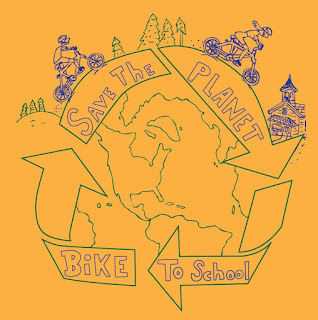 Based on daily bike counts and student surveys, Bike To School Challenge organizers report that both Claggett and Root students took 2,901 rides to school and biked 13,171 miles on May 7-25. On average, 193 students biked each day, or 9.3% of the total enrollment of both schools. This was up from the 1-2% of bike-ridership reported at both schools prior to the start of Medina Bike To School Challenge.

Both schools saved a combined 14,488 pounds of heat-trapping carbon dioxide emissions from the environment by bicycling to school during the challenge’s three weeks. They also saved 588 gallons of gasoline (using the average U.S. vehicle fuel economy of 22.4 MPG) and saved their parents $2,205 on gasoline based on the current Ohio average gas price of $3.75/gallon.

Root Middle School students have a 4.1-mile roundtrip commute to school and biked 7,868 miles during the challenge. The school averaged 128 bicyclists per day, or 15% of the school’s enrollment of 850 students. The students saved 8,655 pounds of CO2 emissions, burned 133,756 calories, and saved their parents $1,316.25 on gasoline.

Claggett Middle School students have a 5.4-mile roundtrip commute to school and biked 5,303 miles during the challenge. The school averaged 65 bicyclists per day, or 7% of the school’s enrollment of 950 students. The students saved 5,833 pounds of CO2 emissions, burned 90,151 calories, and saved their parents $888.75 on gasoline.

For more information about Bike To School Challenge and to see photos and videos, go to www.centurycycles.com/to/BTS or follow the program at www.facebook.com/BikeToSchoolChallenge.
Posted by Century Cycles at 1:39 PM