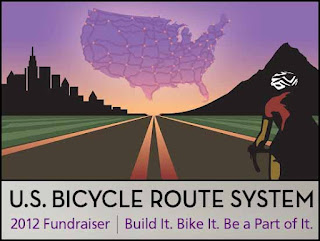 During National Bike Month, the Adventure Cycling Association is raising $50,000 to support the creation of the United States Bicycle Route System (USBRS). Donate today or become a core supporter and help raise funds to build this national network of cycling routes.

U.S. Bicycle Routes are intended to link urban, suburban, and rural areas using a variety of appropriate facilities. These routes are nominated for numbered designation by State Departments of Transportation (DOTs) and are cataloged by the American Association of State Highway and Transportation Officials (AASHTO) through the Special Committee on U.S. Route Numbering (the same committee that assigns numbers to U.S. highways and interstates)

The benefits for cyclists of all types are numerous, mainly an established and mapped route network that can be used for tourism or everyday transportation, and heightened awareness to all road users of the legitimacy of bicycle travel.

In 2011, 6 new U.S. Bicycle Routes were approved. For more information on the USBRS, history, and current progress, see: www.adventurecycling.org/usbrs

The Adventure Cycling Association has a bi-weekly Bike Bits free email newsletter. In addition to updates about the USBRS, you'll also find news on their over 44,000-mile long touring network, and fun stories related to bicycling and bike touring from around the world. They just passed 44,000 Bike Bits subscribers, and in honor of approaching 45,000, the are going to award a free Adventure Cycling annual membership to the 45,000th subscriber. To subscribe to the email newsletter, go to: www.adventurecycling.org/bikebits
Posted by Century Cycles at 9:31 AM