Main sponsors Century Cycles bicycle store in Rocky River and bicycle manufacturer Raleigh Bicycles teamed up to give away two grand prize bicycles per school. Winners of the Raleigh bicycles at Bay High School were Cullen Brewer and Claire Mercer, both freshmen pictured below.

At Bay Middle School, sixth-grader Ellen Brabant and fifth-grader Kate Baeppler won Raleigh bicycles. They are pictured below with Raleigh's Chris Speyer (far left) and BMS teacher Lawrence Kuh, who (along with BHS teacher Eryn Sutterlin) was presented with a new Raleigh bicycle in honor of their commitment to youth bicycling in Bay Village and their leadership, hard work and enthusiasm for Bay Bike To School Challenge. 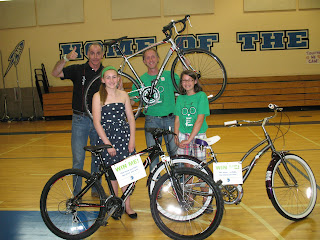 Raleigh Bicycles also gave each school a $500 award for exceeding its bicycling goals during the challenge, to use for fitness and bicycling programs, and committed $750 to the Bay Skate and Bike Park Foundation and Bay Village Green Team for the “Share The Road” signs throughout the city.

The Bay Bike To School Challenge t-shirt design contest was won by Elyse Sopa, a junior at Bay High School. She won a prize package from Century Cycles and Project Earth Environmental Club, and her winning design is featured on the front of the shirt given by Century Cycles to every student who biked to school four days during the challenge.

“Bike To School Challenge is unique and is the best of its kind in the nation,” said Chris Speyer, Executive Vice President of Raleigh Bicycles, who travelled to Bay Village from the company’s headquarters near Seattle, Washington, to personally present the awards. “We work with over 1,400 bike stores around the country. I have never seen a bike-to-school program that generates the level of participation and excitement that this one does. It is a credit to the tremendous amount of commitment and work by the schools, your local bike shop Century Cycles and the entire community to engage and inspire the students. Raleigh Bicycles is extraordinarily proud to be part of Bike To School Challenge and will be back next year as a sponsor.”

Speyer also noted that bike stores in New Hampshire, Oklahoma, California and Minnesota are inspired Bay Village’s program and are eager to use it as a template for their own bike-to-school efforts.