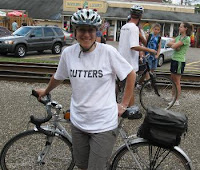 Krista McNamee, from the staff of the Century Cycles store in Rocky River, created this bike route in 2009. It starts near the northern end of the Western Reserve Greenway, and follows several scenic back roads. At just under 50 miles, the ride is a nice long adventure that won't leave you too tired to enjoy a post-ride refreshment at one of the many local wineries in the area.

Most of the route is on paved trail or roads, but there are some brief unpaved sections, taking you through seven covered bridges, including the Smolen-Gulf Bridge, the longest covered bridge in the United States.

Krista's favorite restaurant on the route is Josephine's Ristorante (61 E. Jefferston St. in Jefferson), which is known for the best cole slaw in the world (with pecans, pineapple, and dried cranberries). Otherwise, though, services along the route are relatively few and far between, so pack some extra snacks to fuel up mid-ride, and be prepared to take "stealth" restroom breaks.

The most convenient starting point is at one of the many parking areas along the Western Reserve Greenway. From the Cleveland area, take I-90 East to Exit 223, turn left onto State Route 45, turn right onto Austinburg Road, then follow the signs to Old Austinburg Road for trail access.

Click here to see an interactive map of this route, with notes, mileage, and elevation charts.

Stay tuned for more of our favorite places to ride to get ideas of great trails and routes in your area! 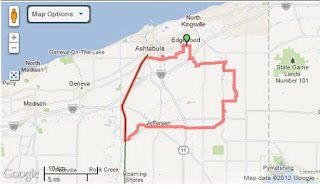