Today is our 20th birthday!

On this day in 1992, Century Cycles Medina officially opened its doors for business! Twenty years (and two additional stores) later, we're still going strong and grateful to all of YOU who make it possible.

On March 7, 1992, Century Cycles was born when Scott Cowan, together with business partner John Boettner and his now-ex-wife Lois Moss, opened what was (and still is!) Medina's largest bicycle store. Check out the news clipping at left, a grand opening announcement that ran in the now-defunct Bicycle Business Journal. Back then, Century Cycles was heralded for offering innovative ideas such as a "preferred customer card" -- a special discount which is still offered to every new bike-buyer at Century Cycles today!

Last Friday, John Boettner (below right) made a special trip to Northeast Ohio from his current home in Alabama to celebrate Century Cycles' 20th anniversary at the stores' annual spring party with his old friend and former business partner, Scott Cowan (below left). Scott and John were joined at the party by well over 100 customers, friends, family and staff of Century Cycles -- stay tuned for more party pictures and reports in the next few days! 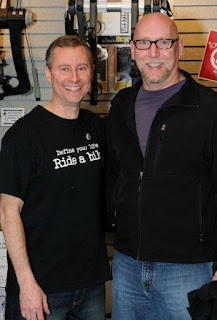 Posted by Century Cycles at 4:45 PM