To meet the needs of the ever-growing cycling community in and around Medina, we've expanded our staff in the Medina store! You can meet them, and more of the Century Cycles crew, at our FREE annual Spring Kick-Off and 20th Anniversary Party, this Friday, March 2 at 7:00pm in our Medina store! 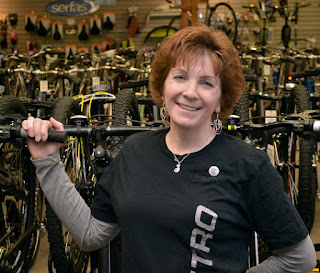 Cathy started with Century Cycles in early 2012, and is a great addition to the team. She specializes in taking care of ladies' cycling needs. Cathy, like many of our employees, is a converted customer. She got cycling fever bad in 2011 and rode her Raleigh Misceo more than 2500 miles! You will find her cycling on the Towpath and also on the Bike MS ride. 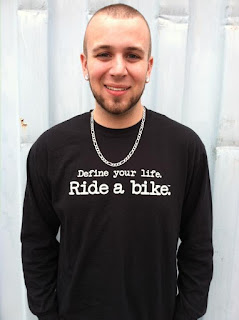 Christopher graduated from Brunswick High School in 2007, and started working in the assembly department at Century Cycles in early 2012. He grew up riding dirt bikes, which sparked his interest in bicycles. He enjoys riding mountain bikes with his buddies at Regan park in Medina. When he's not in the woods, you can catch him doing wheelies down the sidewalk. In fact, he's so good at wheelies that he's set his sights on the world record for riding a continuous wheelie. The record stands at just over 8 miles (!), and Christopher has worked up to just over 6 miles!

(Click here if the video above is not appearing for you.)

So, Christopher can really wheelie, but can he ride the highwheeler? He proved, that yes, he can highwheel it CC style!

(Click here if the video above is not appearing for you.)
Posted by Century Cycles at 3:43 PM