Everybody wins on Electra, especially Meg Ludwig from Strongsville

When Century Cycles decided to have a booth at the Great Big Home and Garden Expo last month, we wanted to display bicycles that would be perfect for anyone to ride (even the people who haven't been on a bike in 20 years) and would look so fun to ride they would stop people in the aisles (even the people who don't normally "ooh" and "aah" over a bicycle). That meant only one bike brand -- Electra Bicycles. 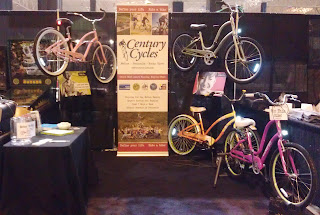 What makes Electra cruiser and Townie bicycles so great? Let's start with the wide seat, then move on to the fact that you sit upright on the bike, not leaned over the handlebars. Plus they look amazing, with cool colors and graphics on both the men's and women's models that make every bike ride even more fun.

But don't take our word for it. Take Gary Thomas' word. He's our awesome rep from Electra, and you can click here to listen to him share his extensive knowledge of cruiser and comfort bikes on this month's episode of Radio Century Cycles -- live online today at 10:30am (or you can listen later on the archive).

You can also take Meg Ludwig's word for it. The Strongsville mother of three was the winner of the Electra Townie bicycle that Century Cycles gave away at the Home and Garden Show: 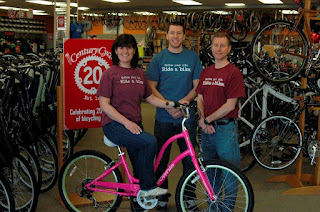 After we drew Meg's name from the thousands of entries, we were surprised to learn she was a Century Cycles customer (that's her very own "Define your life. Ride a bike." t-shirt!) who loves to bicycle every day in Strongsville, weather permitting. Meg was presented with an Electra Townie 7d bicycle by Century Cycles owner Scott Cowan (at right) and Justin Stark, sales manager of our Medina store (center). Congratulations, Meg, and ride on!

Posted by Century Cycles at 9:01 AM