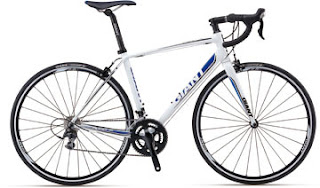 The crew at Cycling Plus magazine recently put the 2012 Giant Defy 1 through some very rigorous testing in its February 2012 edition. What did they find? “…the all-new 2012 frameset sets new benchmarks for alloy responsiveness and ride quality”.

ON THE RIDE:
“The relatively short stem, tapered fork/head-tube and big down-tube mean you can really brace your shoulders against a gear without feeling like you’re going to tear the front end off. Cornering accuracy is similarly precise, with a playful and responsive steering feel in tight turning situations that still stays the right side of stable at higher speeds”.

ON THE SPEC:
“The component spec is excellent considering the quality of chassis that you’re getting for the money…the Giant branded rolling stock (wheelset) perform fine…Giant’s PR3 tyres are proving a useful addition to its growing own brand collection too.”

BUYING ADVICE:
“Having seen the entire test team fall in love with Giant’s Defy 1, we can’t think of anyone who it won’t suit. It’s light, responsive under power, but forgiving over the long haul, well equipped and really well balanced in positional and handling terms. The result is a bike that springs forwards with real purpose when you need it to, but glides along happily when riding is more about clearing your head than maxing your heart rate.”

The component spec on the Giant Defy 1 is anchored by Shimano 105 shifters and derailers, and a Shimano compact double crankset with 50/34-tooth chainrings, which we (and an increasing number of our customers) find is ideal for giving you the light weight and reliability of a double crankset, with the low hill-climbing gears that you used to only find on a triple crankset.

In a follow-up to our Jan. 4 post about another Giant bike, in which the Giant Anthem X 29er received the Readers' Choice Award from the web site Twenty Nine Inches, a new review in Dirt Rag Magazine called the Giant Anthem X 29er 2 "a race-capable trail bike that's fun to ride." "There was little in the way of roots or rocks that would slow down this bike."
Posted by Century Cycles at 11:00 AM