Century Cycles' staff boasts several cyclists who have thousands of miles of experience on extensive bicycle tours throughout North and Central America. They're sharing all their best tips -- as well as their packing lists, travel journals and their own bike rigs -- at our Bike Touring 101 Clinic on February 7.

Whether you're planning a bike adventure around Ohio or around the world (or just dreaming about it one day), you don't want to miss this clinic to help you get a sense of what such an endeavor entails and how to prepare yourself, your bike, and your route for self-supported bike touring.

Your expert instructors are: 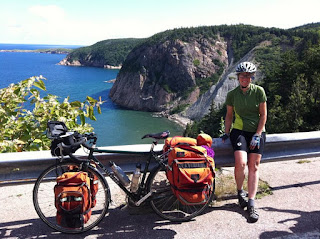 In Rocky River: Krista McNamee and Ray Query
For three weeks late last summer, Krista biked a 900-mile self-supported tour of Nova Scotia, where she is pictured above. Krista has also biked the Southern Tier Bicycle Route and the Great Allegheny Passage/C&O Canal Towpath between Pittsburgh, PA and Washington, DC. Her co-instructor, Ray, is a car-free guy who bikes all year 'round. He has also biked from Cleveland to Costa Rica in 2008 and from Anchorage, Alaska, to Cleveland in 2001.

In Medina: Neil Adams
Neil was one of Krista's riding compatriots for the Nova Scotia tour and is already planning his next tour.

In Peninsula: Kevin Madzia
Kevin biked to Central America with Ray, on a memorable Pan-American Ride in 2008 that was a successful fundraiser for the Melanoma Research Foundation and during which Kevin biked to Guatamala. He also biked Coast to Coast in 2004 and did a 9-day self-supported bike tour of New Mexico in 2007.

The agenda for the Bike Touring 101 clinic includes: Choosing a route, touring bikes, panniers vs. trailers, what to pack (with a take-home packing list), getting your bike there and back, and much more. The clinic begins at 6:30 p.m. simultaneously at all three Century Cycles stores on Tuesday, February 7. It is free and open to all. Light refreshments will be served and all clinic attendees receive a 15% discount on all bicycle accessories and parts immediately after the clinic. To RSVP, call the store location you'd like to attend or email info@centurycycles.com. To view or share the event on Facebook with your friend, go to http://on.fb.me/xoRzOw.
Posted by Century Cycles at 6:18 PM