Redeemed at the Iceman Cometh Challenge

I made my annual pilgrimage up to northern Michigan with a few friends last weekend for the Iceman Cometh Challenge mountain bike race. You may recall my tale of misery and woe at last year's race. I had three goals for this year's race. The first was just to stay upright and keep the rubber side down. The second was to pick the right combination of clothing and gear so that I could ride comfortably and enjoy myself. Given that I've not done a lot of racing or intense riding this year, my third goal was just to finish in some time between my best for this event (2 hours 8 minutes in 2007) and my worst (2 hours 32 minutes last year).

We packed up early Friday morning with my co-worker Doug, former co-worker Brent, and Brandon. Both of the latter are now racing for another bike shop's team, proving that yes, we all CAN just get along (cue "We Are The World" chorus). We left early in order to do a pre-race warm-up ride; we picked a trail outside of Detroit at the Pontiac Lake State Park. It was easy to get to, not far from the main highway. We stopped at the park office to pay our daily usage fee, then proceeded to the trailhead.

It was a nice day, with temps in the mid-50's or so, but there was a pretty stiff breeze in the open area in and around the parking lot. I opted to wear my winter cycling boots, since those were the only cycling shoes I brought (with wool socks, of course), Endura Humvee 3/4-length baggy shorts, Surly long-sleeve wool jersey, Buff bandana under my helmet, DeFeet DuraWool liner gloves, and Pearl Izumi Barrier Convertible jacket. After about a mile on the trail, I got warmed up, plus the tree cover kept the wind at bay, so I stopped to peel the jacket off. I felt perfect for the rest of the ride.

The trail was a wonderful 10.5-mile loop, with gently-sloped ups and downs, smooth banked curves, hardly any rocks, and smooth, dry dirt. Brandon called it a "Quail Hollow on steroids." We headed up to the Frankenmuth Brewery, about an hour north, for the recovery meal, and it ended up timed just right for us to meet there with my friend Dave and his wife Pam (who's a member of Snake Bite Racing and Grunt Girl Racing).

The remaining couple of hour's drive up to Traverse City went by without a hitch, and we checked in at the Iceman Expo to sign in and get our race packets, and checked out the gear at the numerous bike vendor tables. We checked in at the AmericInn, then walked a couple doors down the street for pre-race Mexican carbo-loading at the Red Mesa Grille.

Saturday morning, we fueled up with the waffles and other breakfast buffet fare at the hotel, then headed back to Kalkaska for the race start. The weather forecast called for conditions similar to Friday, so taking a cue from our Friday ride, I dressed in my CC wool jersey, regular wool/lycra shorts, leg warmers, and DeFeet wool liner gloves. I also pulled on my SmartWool beanie just to keep toasty during the trip and before the start. We got to Kalkaska quicker than I expected, so we had plenty of time to check over our bikes and other gear. Here are Brent, Brandon, and I, ready to race:
I rode the couple of blocks from the parking area to the starting line with my down jacket on, and I was still freezing, as the morning chill was taking a while to burn off. I was thinking, "I'm going to be in trouble once I have to take this jacket off at the start."

I'm horrible at pre-race warm-ups, plus at this event, because of the staggered wave starts, you have to stand around in the starting chute and get cool again right before the start anyway. So, my usual strategy is to take it easy at the start, not push too hard, and stay out of the crowded melee during the few blocks of pavement before the first entrance into the woods. Then, after a couple of miles once I get warmed up, I turn it up a notch and start picking people off from my wave one by one.

I ditched the jacket about 15 minutes before my start; sooner than I would have liked, but I figured I'd have to acclimate sooner or later. I kept the SmartWool beanie on, though. I started the Strava GPS tracking app on my phone. I lined up with my wave of about 75 riders and looked around to try to find any easily-recognizable faces or jerseys, so I could get an idea of how I'm doing against them during the race. The only one I noted was a female rider in a Kenda team kit. We took off at the scheduled start time of 9:39am.

I think I was the last person in my wave to make it into the woods; once we got into the first section of rolling doubletrack, the rest of them were already pretty much out of sight. As I got moving, the chill in the air fortunately finally burned off, and I felt pretty comfortable with my clothing choices. I felt like I was moving at a pretty good pace, but after a few miles, I wasn't seeing all of those people that I was supposedly planning to "pick off." I rode the first 5 or so miles virtually alone, which was amazing, considering it's an event of 4,000 racers. I started to get picked off myself by the wave behind me. 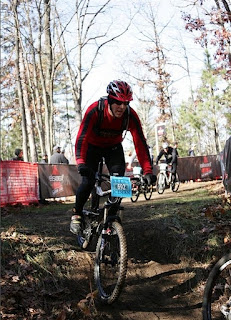 A couple miles later, we entered the first section of true singletrack. I got in just behind this one guy; he was wearing a hydration pack, so I couldn't tell what was on his jersey, other than a pair of wings sticking out on the sides of whatever the logo was. So, in my mind, I started calling him "Wingman." There were a handful of people breathing down my neck, but I figured as long as I kept up with Wingman, I wouldn't worry about what was going on behind me. This was a good strategy, as I think it motivated me to step it up another notch, and I kept up a healthy pace through the singletrack. Once the woods cleared again, I traded places with Wingman a few times on the dirt and gravel roads, until he eventually pulled away, and I didn't see him again. 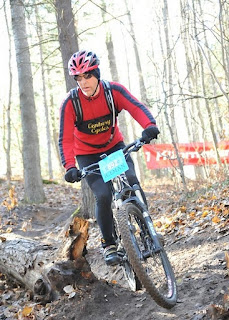 Around this point, I noticed that my cyclocomputer was only reading about 3 and a half miles. The LCD screen was working fine, so I guessed that the battery in the wireless sensor must have conked out in the cold. I'd have to rely on the trail signs to gauge the remaining miles, but this year, they switched them from miles to kilometers, and doing that conversion in your head is tricky enough when you're not working at lactate threshold.

During one downhill section through a small ravine, I had the most memorable visual moment of the day. Part of the hillside was still in the shade, and part was in the sun. The shaded part was still covered with a thick morning frost, and it felt like I was riding through a white spray-painted Christmas scene.

The kilometers ticked away without too much incident. I passed a bunch of other riders; I got passed by a bunch of other riders; it was impossible to tell whether they were in my wave, earlier waves, or later waves. The trail conditions remained good; the sand pits were packed down enough that I could navigate through without getting bogged down or falling over. I was able to pedal and clear all of the short, steep climbs on the second half of the course, with the exception of the infamous "Anita's Hill." Just after that one, the trail dropped down, then sharply back up again, and I finally caught up to the first person that I was able to recognize from my start wave--Kenda girl! 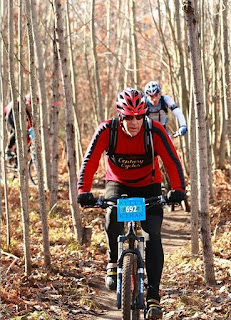 Getting near the finish, I could start to hear the spectator crowd roar and PA announcer. However, the trail took a sharp turn away again, and before I knew it, we were out in the boonies again. Just as we could hear the finish line again, the trail turned to reveal a final steep uphill, which was labeled as "Ice Breaker," but which I heard most people refer to later as the "f-you climb." After this, it was a quick kilometer to go to the finish line. As we entered the fenced-in area of the last few hundred yards before the finish line, who did I see, but Wingman! As I stayed right on his tail up to and through the finish, I forgot to look at the official race clock.
Leaving the finish chute, I took my phone out of my hydration pack to turn stop Strava. It showed a total time of about 2 hours, 35 minutes, but that included the pre-start time in the starting chute, and the few minutes after the finish. The mileage came up as about 29-1/2 miles, about a mile and a half longer than usual.

I went and got a recovery beverage from this year's Iceman title sponsor, Bell's Brewery. Not long after, the results got posted on a nearby board. I ended up with an official time of 2 hours, 22 minutes, and 14 seconds, for a place of 35th out of 99 finishers in my age group. So I met all three of my goals: no crashes, not too hot/cold, and a respectable finish. Brent, riding singlespeed, finished in 2:18, which, like me, was an improvement of 10 minutes under last year's time. Brandon did a scorching 2:03, also on a singlespeed.

We hung around the finish line to watch other racers finish, including the juniors, Sno Cone kids' race, and the pros. We met up with a few other NE Ohio folks, including Brett from Fast Track Cycling (thanks for letting us hang out and share your keg at your RV!). Later, we celebrated with a dinner at the Mackinaw Brewing Company in downtown Traverse City.

Not letting the continuing good weekend weather go to waste, we made another stop on Sunday to ride what is probably Michigan's best-known mountain biking jewel, the Potowatomi Trail at Pinckney State Recreation Area. The awesome terrain was just like Friday's, only almost double the distance--18 miles of smooth, flowing singletrack heaven. Another great excuse, as if one were needed, to celebrate once again with a recovery meal at the Arbor Brewing Company. 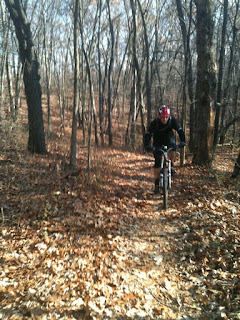 Yesterday, former Century Cycles rental bike guru and Iceman Cometh Challenge veteran Bob stopped by for his annual visit to show off the medals he won in past years. So, there's hope for all of us, if we can hold out long enough to race in the 65+ division! 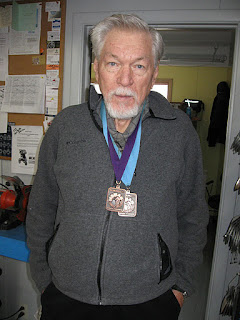