How would you stack up in Le Tour? 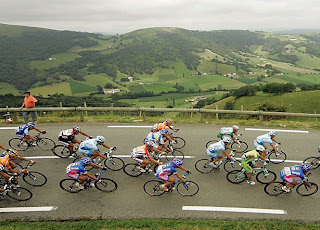 In case you hadn't heard, it's the beginning of the second week of this big bike race that's pretty popular over in Europe. Anyone can ride a bike, right, so what's stopping you or me from competing against the pros for the big money, other than a contract and a plane ticket to Paris? Well, plenty, apparently, according to some of the items on a list from the latest Bicycling Magazine of the differences between an average cyclist and a professional racer in the Tour de France:

Chain replacements:
You: Maybe once a season
Pro: 2-3 per Tour

Source: You Versus The Peloton, Bicycling Magazine

On a semi-related note, a couple of bicycle accessories caught the eyes of different CC staffers this past weekend. The "Bikestache," is well, as it claims, nothing short of glorious: 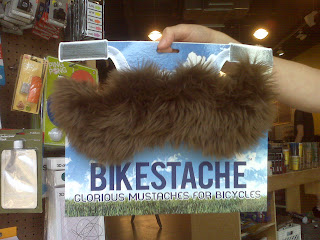 Our favorite in Peninsula were these bass-guitar-shaped pedals on a customer's bike: 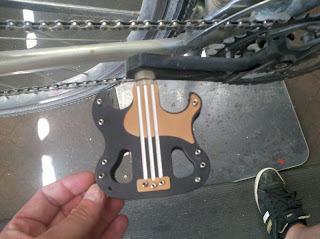 So, while it may not be possible for you to be Andy Schleck, with these two items, you can be just a step away from being a bike-riding Allman Brother.
Posted by Kevin at 10:56 AM