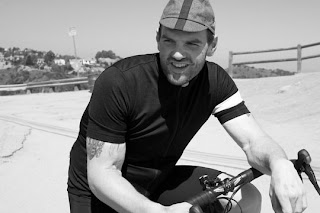 Also filed under the "Celebrities Who Bike" category, in this article, "Super Downsize Me" from Rapha Performance Roadwear, actor Ethan Suplee talks about how he started training for a 5K race, and then starting running more, until knee issues forced him to turn to the bicycle instead.

For any readers who find riding up hills to be a challenge, take note in particular the part of his story where he describes riding up the hill from his house for the first time. Something that he didn't think he could ever do at all is now a routine part of every ride.

Ethan Suplee is known for his roles in films such as American History X, Remember the Titans, and Blow, and probably best-known from the TV series My Name Is Earl. However, perhaps the best example of the "before-and-after" comparison of the way cycling has transformed Ethan's life is this shot from his role as "Thumper" in the movie The Butterfly Effect: 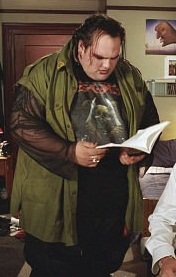 Check out the Lives Defined section of our web site for more inspiring stories of people who lives are defined and transformed by their bicycles.
Posted by Anonymous at 1:00 PM