As we reported here earlier, two of the Century Cycles staff (Krista from Rocky River and Neil from Medina) are planning a self-supported bicycle tour in Nova Scotia in late summer/early fall of 2011.

They've mapped out a tentative route, which takes advantage of winds that are usually from the Southwest, and also lets them enjoy some of the Confederation Trail on Prince Edward Island. 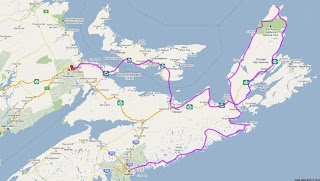 And, you can check out an online version on Bikely.com here: