Another Surly Pugsley finds a home in NE Ohio

The new 2011 model of the Surly Pugsley fat-tire bike became available to order a week or so ago. The guys at the Century Cycles store in Medina sold one to a guy from Beachwood, and he just picked it up today at the Peninsula store.

The bike looks innocent enough without its wheels in place while being assembled: 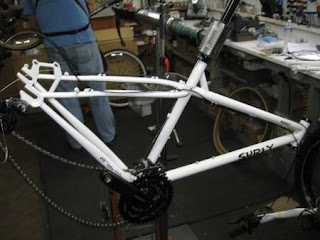 Speaking of those wheels, they are a bit more of a challenge to work on than a traditional bike wheel, as Derrick indicates with his perplexed look: 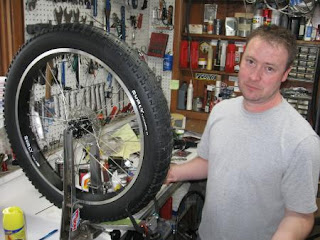 But Derrick had the tools and the know-how to make it work. He noted, however, that the Pugsley wheels come from the factory truer and in less need of tweaking than any other wheel he's seen.

Here's the bike in its final glory: 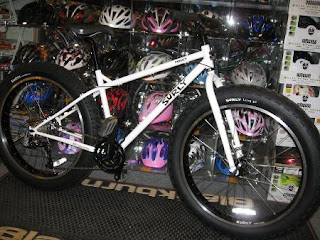 It would have looked a lot better out in its element in the actual, er, elements (i.e. the snow), but it wouldn't have been fair for the customer if he had not been the first one to get the tires dirty!

So of course, you're asking, "How can I get my hands on one of these babies?" The answer is, you can't, at least not right away. The first batch sold out from Surly as of this week. They don't expect to have some more until mid-March. If you've got a hankerin' for a bike to ride in the snow NEXT winter (or this winter, if we get a late spring, or if you're heading to the southern hemisphere in 2011), stop in and give us a deposit towards the $1,549.99 asking price so that we can grab you one AS SOON as they are available again. No, we won't have any in stock that you can look at. Don't bother calling around; nobody else will, either. Get over it.
Posted by Kevin at 6:52 PM