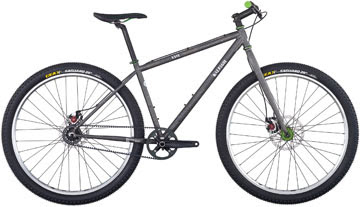 What's the fuss? The website Twenty Nine Inches was eager to get it out of the box and out for a test ride. Closer to home, our Raleigh rep, Sean Burkey, says: "I’ve been on it for nearly a week now with 5 or 6 rides in so far and I LOVE the bike. The belt has performed better than expected and not having to worry about walking around with a 'rookie mark' on my right calf is GREAT!"

Sean recommends going directly to the Gates Belt Drive website to get your questions answered about the belt drive. The New York Times recently ran a good story, "Bicycles, Unchained and Grease-Free," about belt-driven systems for biking, which first appeared on singlespeed mountain bikes (cough, cough) but are now appearing on multi-geared commuter and city bikes as well.
Why singlespeed? For that, look no further than Kevin's comprehensive blog post back in March 2009, The Zen of Singlespeeds.
Specs for the 2011 Raleigh XXIX: