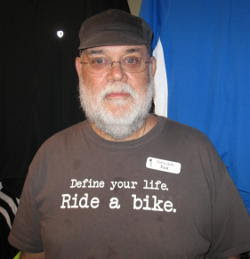 Paul Gallmeier, age 61, is one of several customers-turned-employees at Century Cycles. He has been a valuable addition to the part-time staff of the Peninsula store since the Spring of this year. He lives in nearby Sagamore Hills with his wife and their two Boston Terriers.

Q. How long have you been cycling?

A. It's really been a lifelong thing for me. As a kid growing up in Ft. Wayne, Indiana, I rode my bike to little league games and practices, and everywhere else. It was my only transportation at Indiana University in Bloomington; I rode to classes, work, and to get groceries and other errands. The only time I've really taken a break from bicycling was when I was in the service.

Q. What was your time in the service like?

A. I enlisted in the Navy in March of '67. I was assigned to a couple of different ships in the Pacific and Atlantic. A big part of the time was along the coast of Vietnam on supply ships, but I was also on an aircraft carrier for a while. The big ships can stay at sea almost indefinitely, as long as they can get food, fuel, and ammunition, and that's what the ships I was assigned to did--I was on an "oiler," or fuel supplier, and an ammo supplier. I got to see many other countries: Japan, Hong Kong, Singapore, Spain, Italy, Malta, and the Greek island of Corfu. One day while we were docked for R&R at Crete, we turned the deck into a floating casino. I loved being a sailor, and I learned a lot, but I got out in 1971 because I also wanted to get a college education.

Q. So, you were at IU in Bloomington--there's a big cycling culture there, with the "Little 500" race and the connection to the movie "Breaking Away" and all...what was that like?

A. It was a great town; I lived there for nine years, and I tried to find a way to stay there longer, but the jobs just weren't there. I did have a job driving for the campus bus service for a while during the filming of the movie, and met a lot of the crew as I drove them around town. There are several scenes in the film where if you are familiar with the town, they just aren't right, like where Dave Stoller is supposed to be riding to campus, but if you know the streets, you can tell he's riding the wrong way!

Q. What was your first bicycle?

A. It was the one I rode around as a kid; I don't remember what brand it was, but it had a swept-back handlebar, coaster brakes, and it was a singlespeed--these (points to his legs) were the real gears! Later, I got a Schwinn Varsity, and then a couple years into college I got a Raleigh Record. I still had that Raleigh when we moved to Ohio. In the late 90's, I got another Raleigh, a C-40 hybrid.

Q. How many bikes do you own now?

A. I have a Raleigh Mojave 4.0 mountain bike that I bought from Century Cycles a couple of years ago, and I have a Surly Long Haul Trucker that I bought since I started working here.

Q. Which is your favorite?

A. I love the Surly Long Haul Trucker; it's the best bike I've ever owned.

Q. What is your favorite place to ride?

A. I like hitting the singletrack once in a while, and I've always really liked the Towpath Trail, but I've started to really enjoy riding on the road more since I got the Surly, and I like doing the Valley Loop. It's starting to get me thinking that maybe now I need a "fast" road bike...

Q. What do you like about working at Century Cycles?

A. I like being around the bikes and the gear, and the people I work with. Being a rookie, my co-workers have helped me learn a lot, and I'm still learning. I retired four years ago, and I hardly ever even think about my last job. This has been my best summer in a long time.

A. When it comes to mountain biking, "Speed is your best friend." It's intimidating at first, but once you get used to the idea, keeping your momentum up as much as you can really helps you clear the rough patches. Also, switching to clipless pedals, and the idea that it's easiest to click into them if you just start pedaling and not worry about clicking in until you get going.

Q. What questions to you get asked most often in the store?

A. A lot of questions about chains--cleaning, lubrication, and such. Also, how to use a presta valve, or knowing the difference between the presta valve and the schrader valve.

Q. What is your favorite post-ride refreshment?

A. I'm a beer guy--I like ales and lagers, and German beers, because that's my heritage. I also don't mind a good stiff shot once in a while--tequila or whiskey.
Posted by Kevin at 1:19 PM