Define your life - in the Capitol! Plus other bikes in the news...

Century Cycles' long-time friend Dick DeLombard sent us these photos sporting his "Define your life. Ride a bike." t-shirt in Washington, DC this past weekend: 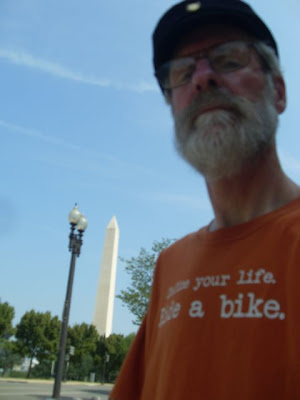 At the Washington Monument 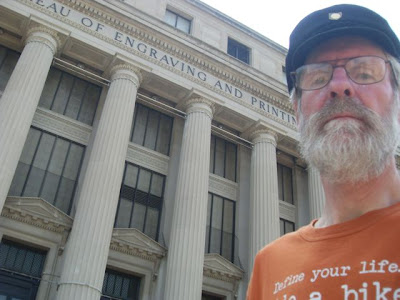 At the Bureau of Engraving and Printing (where, Dick
reminds us, the paper bills in your pocket come from)

Dick rode his high-wheeler bicycle in the July 4th parade. You can often spot Dick on this bike at events through Ohio as well, representing the Ohio chapter of The Wheelmen, a club "Dedicated To The Enjoyment And Preservation Of Our Bicycling Heritage."

Thanks for the photos, Dick!
Yesterday, pizza shop owner Matt McClellan arrived in New York City's Times Square, completing a month-long bicycle trip from Florida. He made the journey surviving only on pizza, stopping for a slice every three hours! You can read more from the New York Daily News.
John Teske is a 6-foot-1-inch tall musician, but his upright double bass outdoes him at 6-foot-4-inches! He's having a trailer custom-built in order to haul his instrument around to gigs in the Seattle area by bicycle. See the full story from the Seattle Times.
Posted by Kevin at 11:30 AM

Email ThisBlogThis!Share to TwitterShare to FacebookShare to Pinterest
Labels: customer photos, In the news, lives defined