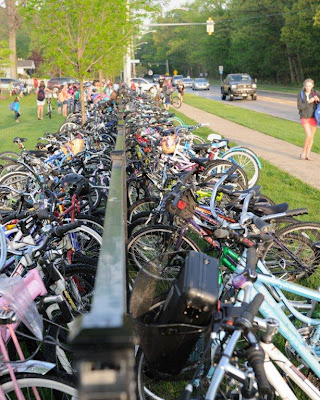 Bay Bike to School Challenge sponsored by Century Cycles and Chipotle ended on Friday, but not before the students bicycled farther than the circumference of the Earth AND inspired a school in Oklahoma to give their own “bike to school” day a try.

The award-winning program concluded with school-wide assemblies at both Bay Middle School (BMS) and Bay High School (BHS), at which local officials and sponsors helped the school administrators celebrate the program’s success with students and award the grand prizes of free bicycles and other prizes.

Bay Village Mayor Deborah Sutherland praised the students and told them that Bay Bike to School Challenge has inspired her to bicycle more to work at City Hall. She said the entire city was proud of their commitment and she encouraged them to keep bicycling all summer long.

The inspiration wasn’t confined to Northeast Ohio, however. A school in Edmond, Oklahoma had their very first Bike To School day on Friday, May 21, after being inspired by Bay Village’s efforts.

From May 3 to May 21, Bay Bike to School Challenge racked up some big numbers:

Those numbers are in stark contrast to national averages. According to the Safe Routes to School National Partnership, only about 15% of U.S. children bike or walk to school today, versus approximately 50% in 1969. As much as 30% of morning traffic is generated by parents driving their children to school, one-third of schools are in “air pollution danger zones” and more than 33% of U.S. children are now overweight and obese or at risk of becoming so.

On May 21, school administrators were also striving to reach “1000 Bikes in Bay” to give the challenge one last boost. They almost met their goal: The bike count for the day was 930 bicycles – 285 at Bay High School, 514 at Bay Middle School, 125 at Westerly, three at Normandy, two at the school board office and one bicycle at Glenview. Organizer Jason Martin, Assistant Principal at BHS, deemed it a success and said, “This was definitely the most bicycles we’ve ever had at Bay schools on one day.”

A special drawing for a Cedar Point season pass was held for the students who bicycled all 15 school days of the challenge. That drawing was won by Hillary Stradtman at BHS and Hunter Dunlop at BMS. Also honored were Camille Eckel and Kathryn Tokar at Bay High School, who won the t-shirt design contest and had their artwork featured on the event’s t-shirt.
++ For complete information about Bay Bike To School Challenge, go to: www.centurycycles.com/to/bts
++ Click here to read a Bicycling Magazine article about other school programs around the country, including Bay Bike To School Challenge.
Posted by Tracey at 3:53 PM