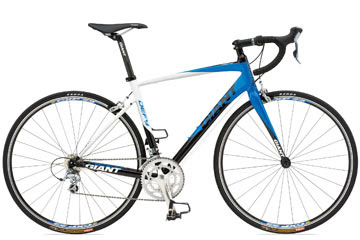 Two bikes models from Giant Bicycles received the top Editors' Choice awards by Bicycling Magazine.
In the "Entry Level Road Bike" category, the Giant Defy 2 gets the nod. The testers said:
"The Giant [Defy 2] just cruises along, steady under pedal input, never penalizing you through a broad power range."
"As smooth as it is, it's still a sporty bike with good responsiveness and a lively feel."
"Smart move by Giant outfitting the Defy the 25c tires because it probably played a part in the velvety smooth ride."
Another feature that we especially like is the compact double (50/34) crankset, which gives you the low gears you need for climbing Northeast Ohio hills, with the simplicity and weight savings of a two-chainring system. We've got the Giant Defy 2 in stock in all three Century Cycles stores, so stop in for a test ride, add take one home for only $999.99! 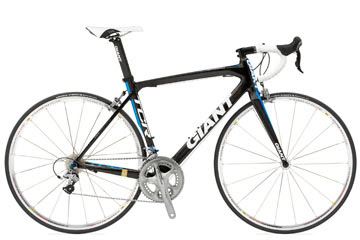 In the "Women's Road Bike" category, the Giant TCR Advanced 1 Women's was the top pick. It features a carbon fiber frame and fork, Shimano Ultegra drive train and brakes, and a "versatile mix of speed and comfort." Other comments from the Bicycling testers:
"Has a sprightly demeaner and aggressive positioning, but was still comfortable and stable."
"Has a light and lively feel...and the sharpest wheels [Mavic Ksyrium Elites] of the bunch. And the position is quite comfortable."
"Jams along well on flat, feels responsive on hard rides and turns nicely."
The Giant Women's TCR Advanced 1 W is available by special-order for $3,399.99.
Posted by Kevin at 3:41 PM