This week, there're parties to celebrate all of the finalists, and give you the chance to vote for the final winners!

Best of the West Party
When: Tuesday, April 27, 2010 6:00-9:00pm
Where: LaCentre Conference and Banquet Facility, 25777 Detroit Rd, Westlake, Ohio 44145
Tickets: $15 (buy online) Includes two complimentary drink tickets, light appetizers, entertainment, a ballot to cast a vote for the businesses you love most, and a 1-year subscription to both Cleveland Magazine and West Shore live well.

Best of the East Party 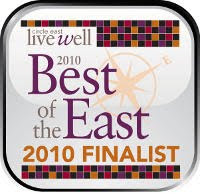 When: Thursday, April 29, 2010 6:00-9:00pm
Where: Andrews Osborne Academy, 38588 Mentor Ave, Willoughby, Ohio 44094
Tickets: $20 (buy online) Includes a sampling of food and products from Best of the East finalists, plus catered appetizers, a cocktail beverage of your choice, entertainment, raffles and activities, valet parking, and a complimentary 1-year subscription to Cleveland Magazine.

Look for the Century Cycles tables at both events!
Posted by Kevin at 2:53 AM