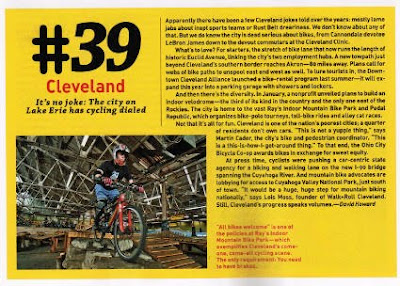 The latest issue of Bicycling magazine features their annual list of the Top 50 Cycling Cities in the U.S. Making the cut for the first time in our memory is (drumroll, please)...Cleveland!

The magazine cites several reasons for the honor, such as the bike lane along historic Euclid Avenue, the Towpath Trail, and the Downtown Cleveland Alliance's bike-rental program. Another big win is Ray's Indoor Mountain Bike Park (the first of its kind in the world!) and Pedal Republik, organizers of bike-polo events.

Cleveland was categorized as one of the "up and coming" bike cities, meaning we were recognized as much for our future potential as well as existing amenities. Projects in the works include expanding the bike trail network east and west of the city, a commuter bike station downtown, an indoor velodrome being planned, advocates pushing for bike/pedestrian access to the new I-90 Innerbelt bridge, and CAMBA lobbying for mountain bike trails in the Cuyahoga Valley National Park.

The list has gotten a lot of coverage in other media, from the Treehugger site to The Plain Dealer, who quoted Century Cycles Owner Scott Cowan. You can read the brief online version of the Bicycling Magazine story here, but below is the text of the full version from the printed magazine:

#39 Cleveland
It's no joke; the city on Lake Erie has cycling dialed

Apparently there have been a few Cleveland jokes told over the years: mostly lame jabs about inept sports teams or Rust Belt dreariness. We don't know about any of that. But we do know the city is dead serious about bikes, from Cannondale devotee LeBron James to the devout commuters at the Cleveland Clinic.

What's to love? For starters, the stretch of bike lane that now runs the length of historic Euclid Avenue, linking the city's two employment hubs. A new towpath just beyond Cleveland's southern border reaches Akron--80 miles away. Plans call for webs of bike paths to unspool east and west as well. To lure tourists in, the Downtown Cleveland Alliance launched a bike-rental program last summer--it will expand this year into a parking garage with showers and lockers.

And then there's the diversity. In January, a nonprofit unveiled plans to build an indoor velodrome--the third of its kind in the country and and the only one east of the Rockies. The city is home to the vast Ray's Indoor Mountain Bike Park and Pedal Republic, which organizes bike-polo tourneys, tall-bike rides and alley cat races.

Not that it's all for fun. Cleveland is one of the nation's poorest cities; a quarter of residents don't own cars. "This is not a yuppie thing," says Martin Cader, the city's bike and pedestrian coordinator. "This is a this-is-how-I-get-around thing." To that end, the Ohio City Bicycle Co-op awards bikes in exchange for sweat equity.

At press time, cyclists were pushing a car-centric state agency for a biking and walking lane on the new I-90 bridge spanning the Cuyahoga River. And mountain bike advocates are lobbying for access to Cuyahoga Valley National Park, just south of town. "It would be a huge, huge step for mountain biking nationally," says Lois Moss, founder of Walk+Roll Cleveland. Still, Cleveland's progress speaks volumes. --David Howard
Posted by Kevin at 10:59 AM