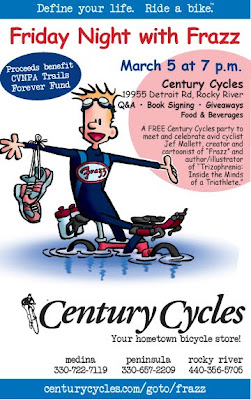 In just four days, we get to toast the kick-off to the cycling season with Century Cycles' annual spring party! This year, we are very grateful to have a very special guest join us -- "Frazz" cartoonist Jef Mallett.
As bicycling continues to grow as both a sport and a way of life in the United States, Jef will certainly deserve some of the credit for that growth, thanks to "Frazz" comic strips like the one below. How awesome is it that this strip did NOT run in a bicycling or cyclocross pub, preaching to the already-converted cycling crowd, but instead ran in over 160 daily newspapers across the United States -- including The Plain Dealer and The Akron Beacon Journal -- spreading the good bicycling word to a wide audience?
Posted by Tracey at 10:01 AM