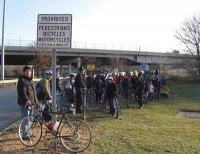 ClevelandBikes and other supporters of the proposed bike and pedestrian lane on the new Innerbelt Bridge have organized a citizen's rally today at 6:30 p.m. on the steps of Cleveland City Hall. They want people to join them in what may be the last chance to convince ODOT to incorporate bike/pedestrian access and for equitable treatment for "alternative transportation."

After the 6:30 p.m. rally on the steps, citizens will attend the 7pm City Council meeting where a resolution is expected to be introduced expressing Council's desire for an additional "design alternative" for the lane, similar to that passed by the Cleveland Planning Commission on January 22. On Tuesday, ODOT will announce the three finalist Design-Build Teams, who will be preparing design plans for the bridge.
This is probably the last chance for the public to speak up about the $450 million bridge and ask ODOT to build a bridge for all -- motorists, cyclists and the 25% of Cleveland residents who don't own a car or simply prefer walking and riding for healthy transportation and recreation.
For more information about this issue, including Century Cycles' letter of support, go to www.gcbl.org/innerbelt. Click here to go to the Facebook page for the event.
Posted by Tracey at 8:59 AM