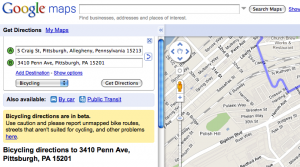 The National Bike Summit is going on right now in Washington, D.C., and Google selected it as the time and place to announce it is adding bicycling directions to its wildly popular Google Maps. Starting today, users can now choose biking when deciding how to get to their destination, plus mapping daily commutes or planning recreational or trail rides just became a lot easier.

According to Google, this has been the most requested addition to Google Maps.
Click here to read the complete press release from the League of American Bicyclists. Here is a good article from today's Chicago Tribune on the topic, too.
If you're on Twitter, you can follow the Bike League for more updates. I also like to follow Bike Portland (they really do regularly "inform and inspire," plus they are live-tweeting from the National Bike Summit) and of course Century Cycles.
Posted by Tracey at 8:49 AM