Bike To School Challenge awarded Project of the Year 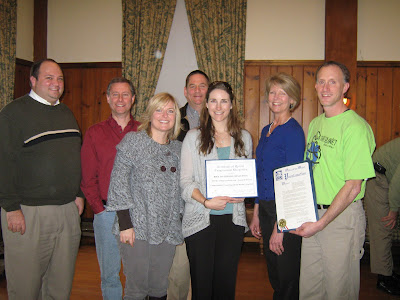 In a ceremony last Sunday in Bay Village, Bay Bike To School Challenge sponsored by Century Cycles and Chipotle was awarded "Project of the Year" by Bay Village Community Council. The program also received a Certificate of Special Congressional Recognition from Congressman Dennis Kucinich.
But it was the Proclamation from the Mayor of Bay Village, Deborah Sutherland, that really summed up what a special program it is. (Mayor Sutherland is in the photo above from the awards ceremony. She's in the blue sweater, standing between Eryn Whistler and Lawrence Kuh, teachers who make BTS possible. From the left is BHS Assistant Principal Jason Martin, Scott Cowan and Tracey Bradnan from Century Cycles, and BMS Principal Sean McAndrews.)
We don't usually go all official on this blog, but this proclamation has a lot of worthwhile whereas's and therefore's we have to share. Before we do that, we must first say a huge THANK YOU to all the fine folks in Bay Village -- from the council who gave BTS such wonderful recognition to the school system that makes it all possible to all the kids and teachers who love to ride their bikes. We can't wait for the start of the 2010 Bike To School Challenge on May 3!
Office of the Mayor Proclamation
WHEREAS the students and staff of Bay High School and Bay Middle School are today being honored by the Bay Village Community Council as recipient of the 2010 Project of the Year Award in recognition of their efforts during the May 2009 Bike To School Challenge; and
WHEREAS the 2009 Bike To School Challenge, coordinated by the Bay Village City School District and co-sponsored by Bay High alumnus Scott Cowan engaged over 1,200 students and 90 school staff members who logged a total of 37,042 miles on their bikes during a three-week period; and
WHEREAS the Bike To School Challenge began in 2007 as a student driven initiative to encourage students and staff of Bay High to ride bicycles to school instead of driving automobiles highlighting the need to become less dependent on fossil fuels and raise awareness of environmental issues; and
WHEREAS the students of Bay High School invited the student of Bay Middle School to join in the 2009 Bike To School Challenge and the event was expanded with programs highlighting bike safety, skills and rules of the road; and
WHEREAS Bay Schools staff members Eryn Whistler, Jason Martin, Mark Smithberger and Lawrence Kuh worked with Scott Cowan, owner of Century Cycles in Rocky River who sponsored the program and brought in co-sponsor Chipotle, providing incentives and four new bicycles as grand prizes to encourage student participation; and
WHEREAS Bay Middle School won the event's first Golden Sprocket Award for having the greatest number of student participants in this year's challenge; and
WHEREAS in their effort to "go green" the students and staff showed what three weeks of bicycle riding instead of driving could do to save energy, reduce pollution and promote a health active lifestyle in our community.
NOW THEREFORE, I, Deborah L. Sutherland, Mayor of the City of Bay Village, on behalf of the Administration and the City Council and the citizens of Bay Village, now join with the Bay Village Community Council in extending sincere appreciation to the students and staff of Bay High School and Bay Middle School for their outstanding example of environmental awareness and healthy behavior. Thank you.
Posted by Tracey at 4:58 PM