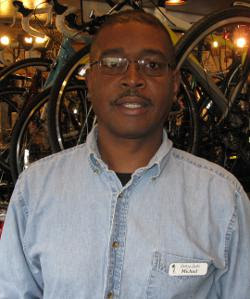 It’s pretty cool that Century Cycles’ only grandpa on staff also has the nickname “Road Dog.” Michael Williams, 59, joined the Century Cycles team six years ago after retiring as a dairy manager at Tops grocery store. He lives in Oakwood Village with his wife, Carolyn, and they keep very busy with five grandchildren who are all under the age of 5.

Q: What do you like about working in a bike store?
A: It’s not as stressful. There are no expiration dates on bikes like there are on dairy products.

Q: How many bikes do you own?
A: Four, plus my wife rides and we have trailers for the grandkids. I also have a Harley motorcycle. I spend most of my time on two wheels.

Q: What’s your favorite trail or ride?
A: My buddies and I have a ride we do through the inner city, through downtown and along the Shoreway. We also rode around Lake Erie about four years ago. That was a real good time.

Q: What’s the best piece of cycling advice you’ve received?
A: If you’re riding in a pack, don’t watch the wheel of the bike in front of you -- watch the rider’s back.

Q: What’s the most frequent piece of cycling advice you give?
A: People tell me they want a bike that doesn’t hurt their butt. I tell them to spend more time in the saddle and their butts won’t hurt. They also say to me “You’re how old?! You can’t be that old!” I tell them that bicycles keep you young.

Q: What’s your favorite bicycle?
A: My Marin road bike.

Q: What was your first bicycle?
A: A big old Schwinn. It was red and gray.