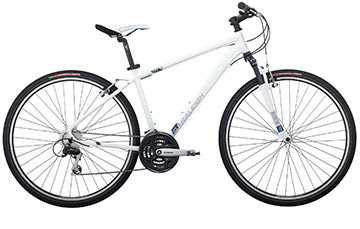 Here's the Raleigh Misceo 1.0 bicycle, new for 2010. We just received a sample of one of these babies for Sean, the local Raleigh sales rep, and put it together for him at our Peninsula store. This bike falls in yet another new niche category in the bike world, but a niche that many of us felt needed to be filled.

I'd describe this category as somewhere between a traditional hybrid bike (like the Raleigh Route 4 or the Giant Cypress DX) and a flat-bar road bike or "fitness" bike (like the Raleigh Cadent FT 1 or the Giant Rapid 3). It's a performance hybrid. Or some have taken to calling it an "urban mountain bike," but I think that's misleading; that sounds like it's meant for this kind of riding, which it definitely ain't.

Who needs this bike? Somebody who wants to do every kind of riding in between the extremes. It's not a mountain bike, so it's not for extreme off-road riding, and it's not a zippy road racer, either, but it's anything else you can think of. Every-day urban and exurban commuting. Paved/dirt/gravel road touring. Coffee shop/pub exploring. Hook up a cargo rack or trailer, and I see it as the perfect bike for an overnight adventure on the Ohio & Erie Canal Towpath Trail or Great Allegheny Passage. Finally, and I hate to say it, but this is the bike for the person who really just needs a traditional hybrid, but wants something more sporty and hip-looking instead of a "grandpa bike."

This sample bike is a Medium frame, but it won't be around for long. Give us a little notice, though, and I'm sure Sean would be willing to bring it back some time if you want to check it out. 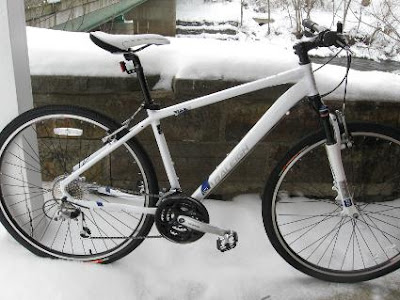 At $549.99, it's spec'ed out pretty decently, with a full complement of genuine Shimano parts, from the crankset, 24-speed shifters, derailleurs, hubs, and even the linear-pull brakes (which is where many companies use a no-name brand to save a few bucks). The frame is Raleigh's Atomic 13 butted aluminum, and an SR SunTour suspension fork provides 63mm of cush to smooth out the potholes, curbs, and trail ruts of your everday adventures. The fork also even has a SpeedLock lever to turn off the suspension for better response on smooth pavement. 700x38C Vittoria Randonneur tires can take the abuse without holding you back like mountain bike tires do. The parts mix is topped off with Raleigh's house-brand Avenir saddle, seatpost, handlebar, and stem. 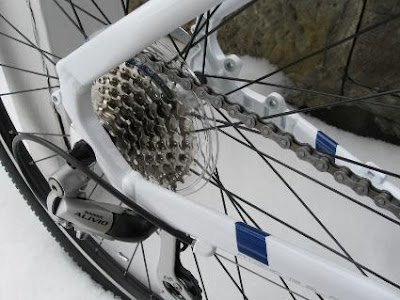 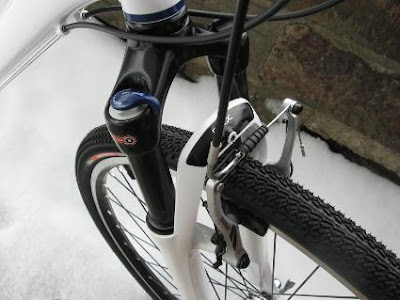 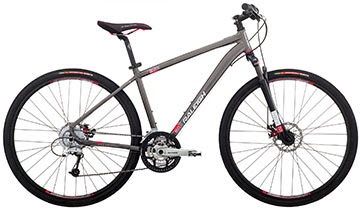 If you want to step it up a notch on the parts package, $769.99 gets you the Raleigh Misceo 2.0. The extra 220 bucks gives you an upgraded drive train featuring 27-speed Shimano Deore components, and stopping power provided by Avid's bombproof BB5 mechanical disc brakes. All mated to the same snappy Atomic 13 butted aluminum frame. This bike has been compared to the Gary Fisher Utopia, which has almost identical spec on the frame, fork, and components, but comes in with a $110 higher price tag of $879.99.