In Century Cycles' online poll last month, 27% of the people who responded said that they planned to do an organized club or group ride on New Years Day. One of the most popular such rides is the Medina County Bicycle Club's ABCDEFGHIJ! Ride, or A Bi-Cycling Dandy Excuse for Getting Hibernated In January.

Ride director Dick DeLombard sent us this report and photo from the event:

Well, we had 51 intrepid bike riders do the 34th annual ABCDEFGHIJ! in Medina. Most riders did the full 24 mile route. An eleven year old Boy Scout and his father did the 24 mile route also. They were the last ones in, but he was smiling! Riders came from all around Cleveland and Akron area as well as Bellevue and other far-away places. A good time was had by all! 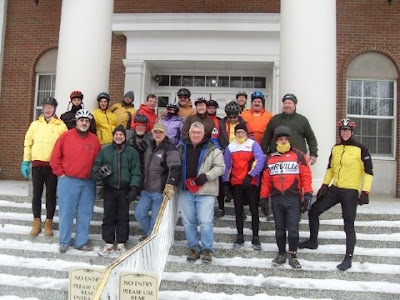 Thanks for the report, Dick!

He and other riders were quoted in this coverage of the event in Friday's edition of the Medina Sun. You can read the article online here.

As we reported last year, the 2009 ABCDEFGHIJ! Ride was featured in a slide show produced by MedinaMultiMedia.com. The story, Ringing in the New Miles, is still available on their web site.
Posted by Kevin at 10:28 AM