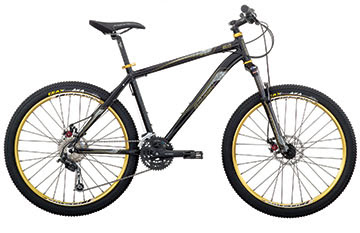 A 2010 Raleigh Talus 8.0 mountain bike was recently commissioned into service for duty by some of our finest public servants!
Gloria Glens is a community situated near Chippewa Lake in Medina County. The village is patrolled by the Medina County Sheriff's Department. When they originally set up their bicycle patrol unit some time ago, they shared a bicycle with nearby Lafayette Township. Due to scheduling demands, they decided it was time to get their own vehicle, and had originally looked at a police-specific Smith & Wesson model, but decided to see what Century Cycles, their hometown bicycle shop in Medina, had to offer. The Raleigh Talus 8.0 provided a better-equipped bike at a lower price.
Here it is all decked out with police-issue lights from NiteRider, Topeak Explorer rear cargo rack and bag, Lezyne frame pump, kickstand and other accessories (including some custom-made Sheriff's Department stickers): 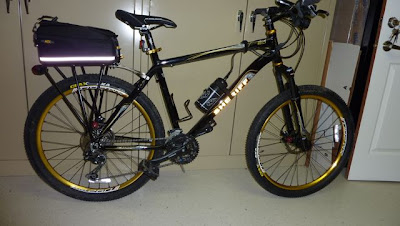 Officer Mike Hereda of the Gloria Glens force says that they love the comfort and performance of the bike, plus the visibility and access to the neighborhood that it provides them. He says citizens are much more able and willing to approach and talk to an officer patrolling on the bike, compared to sitting in a police cruiser. An unexpected benefit came after a recent tornado passed near the area; the resulting road closures meant that the bike was the only vehicle able to access the community!
Our thanks go to the Gloria Glens Council for approving the purchase, and to the Police Department for sharing their story and photo with us! If you'd like to test out the Raleigh Talus 8.0 for your own adventures, we've got them in stock in all three of our stores!
Posted by Kevin at 4:01 PM