Night Ride is ON, without costumes 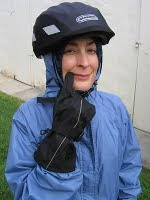 The Night Ride on the Towpath scheduled for 8:00pm tonight (Fri 10/9/2009) is still ON! Despite the rain, a couple of the Century Cycles staff have said they will ride, unless it becomes a torrential downpour by this evening.

Don't bother coming in costume, though, as rain gear will probably be more appropriate. We'll save the costumes and glow-in-the-dark goodies for the first ride of the 2010 season (or a later one, if it's a rainy April in 2010!).

The Peninsula store will remain open until 8:00pm to handle any of your last-minute Night Ride needs, such as fixing a flat tire, a new light, helmet, or waterproof jacket.
Posted by Kevin at 3:04 PM