I've been hearing a lot about the new Towpath Trail connections in and around Akron. It had been quite a while since I had ridden down in that area, and I had some time last week, so I thought I'd go do a little exploring to check it out.
If you head south on the Towpath from the Cuyahoga Valley National Park, it now takes you all the way into downtown Akron. The newest section takes you on a bridge over the MLK Parkway, and dead-ends at a downtown corner. Fear not, though, as the on-street connection is very short and safe. It is clearly marked with signs; you can take the road, but sticking to the sidewalk is allowed (and encouraged, if you're riding with the kids). Go about a block and turn right, then go another block and turn left, then go one more block, and you'll be back on the Towpath (again, it's clearly marked with signs).
The dedicated off-street Towpath takes you behind the Canal Park baseball stadium (home of the AAA-league Cleveland Indians affiliate Akron Aeros), behind some additional downtown establishments, and then it appears to dead-end in a parking lot behind the Spaghetti Warehouse. You can proceed straight through the parking lot. Somebody was kind enough to paint these markings on the pavement to show you the way: 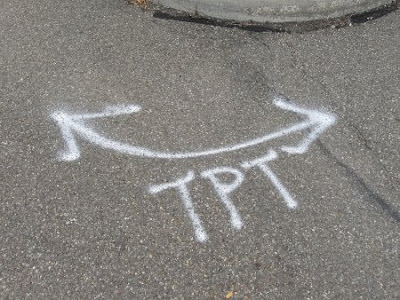 The next step to continue following the Towpath route is exactly the opposite of what you would expect. Proceed on the railroad tracks that go through the abandoned-looking factory, ignoring the "DO NOT ENTER" and "Restricted Area" signs! 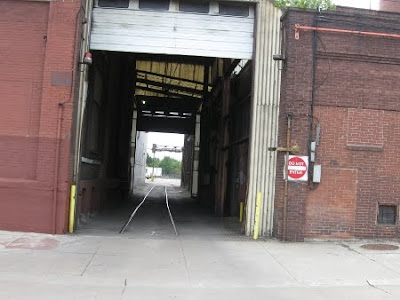 Continue following the parking lot, and when you run into the street again, turn right, go about 1/2 block, and look for the sign directing you to turn left to get back on the dedicated Towpath.

It just so happened that as I was going through the area, some city workers were getting some additional new signage put up, so it will be even easier to follow the route in the near future. 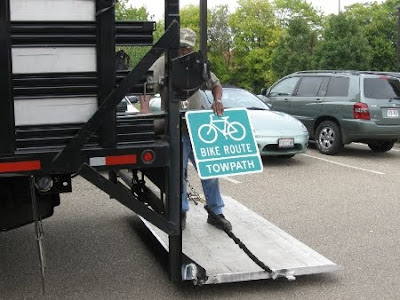 As you continue south on the Towpath from downtown, you get to the beautiful new Summit Lake Floating Bridge, which was just completed and dedicated this past summer. 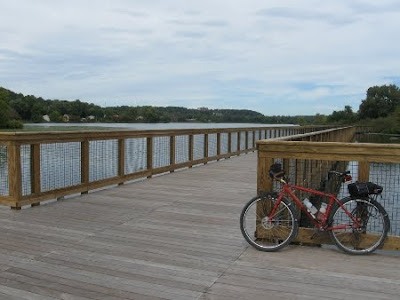 The Towpath Trail continues south to Barberton, and dead-ends at Snyder Road. Fear not, again, because all you have to do is make a left on Snyder Rd, follow it about 1/3 mile to the first traffic light, turn right onto Van Buren Road, and follow that about 3/4 mile, and you can hop right back on the Towpath. From there, it's smooth sailing all the way through Clinton, Canal Fulton, and on to Massillon before you hit any on-street riding again.
Just north of Clinton, there is a new primitive campground, for those of you who have been itching for some place to crash while doing some overnight Towpath touring. It's about 1/4 mile south of the Center Road trailhead; look for this little sign and turn-off on your left if you're riding south: 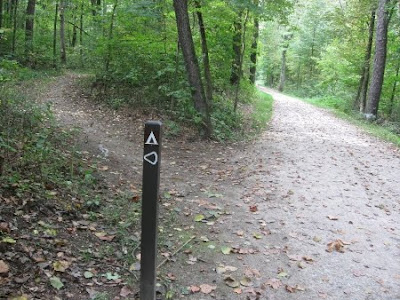 There are three campsites, with no running water, and no open fires permitted. Look for this kiosk with the self-registration sign-up sheet: 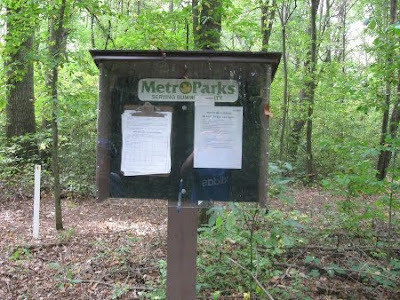