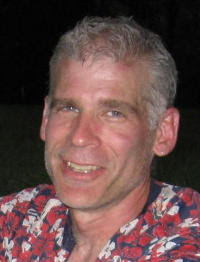 Ray Query has been working at Century Cycles for a little over 5 years, starting at the Solon store, and then at the Rocky River store for the past several years. But he's a lifelong cyclist, and our resident authority on living a car-free lifestyle. He does not own a car, nor does he have a driver's license. He's been interviewed and quoted in local media many times, whenever somebody's looking for a story on hardcore cyclists. He currently lives in Lakewood with his wife Jen.

Q. What do you like about working at Century Cycles?

A. My favorite thing used to be my 19-mile ride to get to the Solon store--believe it or not, I miss that. I'm only 1-1/2 miles away from work now. But overall, I like getting to work with great people.

Q. What was your first bike?

A. When I was about four years old, my neighbor rescued this old klunker from the garbage and fixed it up for me. I don't know what brand it was, and you probably would not have been able to tell anyway. It was rust-colored (probably not the color of the paint!), but it was good enough, and I've loved bicycling ever since then.

Q. What do you like to do when you're not cycling or working?

A. I like working in my garden. I have peppers, tomatoes, squash, herbs, and beans--lots of beans. I'm a big soccer fan; I was a pretty good player back in the day, but now I just enjoy watching it.

Q. What is your biggest accomplishment on a bike?

A. I guess it would be the trip from Cleveland to Central America that I did with Kevin [from the Peninsula store] last year, to raise money for the Melanoma Research Foundation.

Q. What is your most memorable part of that trip?

A. This one night, I think it was just our second day in Mexico, we were wandering around the small town where we were staying, looking for some dinner. We stopped into this bar, and they did not serve food, but we decided to hang around to have a beer. It just so happened that there were a couple of other guys in there that were salesmen for the Modelo Brewing Company--you know, the largest brewer in Mexico; they make Corona, among others. They started buying us rounds of beer, and kept insisting on buying us one after another. We kept trying to find a way to leave politely, being very hungry, but another customer remarked to us how rude it is considered in their culture to turn down a drink that someone offers to buy you. About 8 or 10 beers apiece later, we managed to make our way out of the bar, but all of the restaurants in town were closed by this time. We finally found a street vendor serving large sandwiches, or "tortas," from a cart, so we got a couple and scarfed them down. Maybe it was the beer, but that felt like one of our best meals of the whole trip! Either that, or getting to see the birthplace of Elvis. I'm kidding, but Tupelo, Mississippi was really a nice city, and a pleasant place to visit.

Q. What was the toughest part of the trip?

A. Texas Hill Country. Those were some of the longest, hottest riding days I've ever put in.

Q. But that's not the longest bike trip you've ever done, though, right?

A. Right; I rode home to Cleveland from Anchorage, Alaska back in 2001.

Q. How many bikes do you own?

A. Hmmm...I think about a dozen, but it's hard to keep track, because a couple of them are out on loan to friends. I still have the Diamondback Transporter that was donated by Raleigh to use on last year's trip; it is waiting to go on loan to a friend.

Q. Which one is your favorite?

A. My 1985 Peugot road bike. We grew up together. And now, we're growing old together, too.

Q. What is your favorite place to ride?

A. Wisconsin, for the gently rolling hills, the friendly small towns, the crisp air that is not too hot or humid, and the steady supply of Pabst Blue Ribbon.

Q. What question do customers ask you most often?

A. "Has anyone ever told you that you look like Steve Martin?"

Q. What piece of cycling advice would you like to give?

A. Ride fast and take chances. 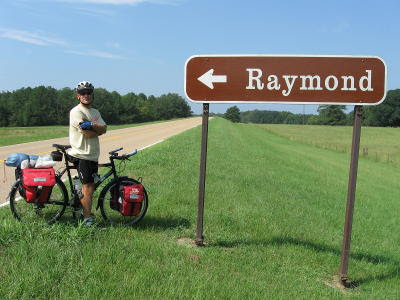