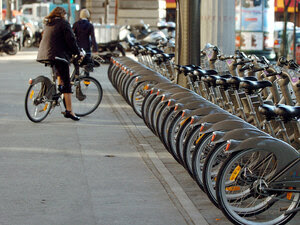 Velib, the bicycle-sharing program in the city of Paris, France, celebrates its second anniversary this month. The word Velib (pronounced VAY-leeb), comes from combining "velo," the French word for bicycle, and "liberte," or freedom.

The program has been very popular, with surveys showing 94% of Parisians judging it to be a success. It has not been without problems, however; mainly, a high rate of vandalism. Inexplicably, a similar bike-sharing program in the French city of Lyon has not had such a problem.

You can read and/or listen to more details in this story from today's Morning Edition program on National Public Radio:

Email ThisBlogThis!Share to TwitterShare to FacebookShare to Pinterest
Labels: bicycle sharing, France, In the news, Paris