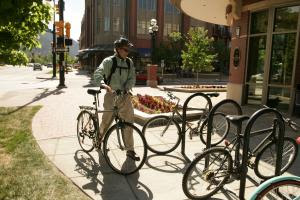 If you subscribe to the Bikes Belong Newsletter, than you saw these pretty interesting stats in the "Did You Know?" section at the end:

Each year, the average American household spends nearly three months' pay on transportation. Center for Neighborhood Technology, 2009 in AZ Central.com, 2009, "Average cost of transport consumes 3 months' pay"
According to a field study by the city of Portland, OR, while bicyclists come to a complete stop at stop signs only 7 percent of the time, motorists stop completely only 22 percent of the time. Rose, J., 2009 "Hey, Oregon, is that an Idaho stop or a California stop?", The Oregonian
A study of 2,400 adults found that those who biked to work were fitter, less likely to be obese, and had healthier blood pressure, and insulin levels than those who commuted by car. Gordon-Larsen, P., et al., 2009 Active commuting and cardiovascular disease risk, Archives of Internal Medicine, 169, 1216-1223
Century Cycles owner Scott Cowan was just in Seattle to see the 2010 Raleigh and Diamondback line-up (which is obviously so hot it caused a record heat wave) and he heard an inspirational presentation from Tim Blumenthal, the executive director of Bikes Belong. Big takeaway? There is more money coming toward bike lanes and bike infrastructure times 100 than we've seen in the past 20 years. Bipartisan support for bicycling is strong and things are moving forward in a positive way thanks to the initiatives of Bikes Belong. Also inspiring? Bikes Belong new slogans: "Get more people on bicycles more often." and "When people ride bikes, good things happen." Amen!
Posted by Tracey at 3:05 PM