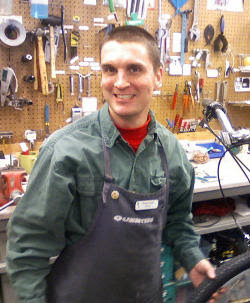 The Medina store’s Tom Wiseman has a 12-year history with Century Cycles, yet has only four years’ tenure as an employee. He was on staff from 1997 to 1999, then came back into the Century Cycles fold in 2007. Tom has a strong background in mountain bike racing, but he is no slouch when it comes to road racing, either. He recently came in second in the 35-39 age group in the Twin Sizzler, a 27-mile bike race that’s an annual July 4th tradition in Medina.

Q: Congratulations on coming in second in your age group! How did the race go?

A: I’m used to mountain bike races. When I compete in road bike races, I never save anything for the end sprint. With a race that short, the whole thing is a sprint. I have a Polar cycling computer that’s also a heart rate monitor and it told me I burned 1,600 calories in the one hour and 10 minutes of the race. I went home afterwards and took a nap, then ate burgers and beer -- it was July 4th! (Polar computers are available by special order from Century Cycles.)

Q: What is your biggest accomplishment on a bicycle?

A: Any ride that I don’t crash or break my bike.

Q: Not Alaska?! (Tom and a friend came in first place in the 2007 Fireweed 400, also known as the Great Alaska Double Century, in the Men’s Duo category.)

A: The Fireweed 400 is probably my most memorable race, but it’s not my biggest accomplishment on a bike. I was in Alaska to support the team as a mechanic, but instead of wrenching I ended up riding. It certainly was the best five-day trip I’ve ever had, but I’ve had more exciting races and wins closer to home. I’m much more proud of my mountain bike racing.

A: I competed in the Ohio Mountain Bike Racing Series from 1996 until 2006, and I spent four of those years ranked in the top 10. It was a much bigger field of competitors and there was much more adversity to overcome to be successful. Those races are what are really at the top of my accomplishments. But it’s not about racing.

A: It’s about friends.

Q: What bike did you ride in the Twin Sizzler and how many bikes do you own?

A: I rode a Raleigh Prestige road bike in the Twin Sizzler. I’m down to four bikes now. I had 12, but I had to put my wife through nursing school.

Q: Do you have a favorite bike?

A: No. I go through them pretty quickly, getting a new bike every 18 months or so. I’ve owned every manufacturer. Probably the bike I most fondly remember is a Schwinn Homegrown from the mid-1990s.

Q: What was your first bike?

A: My first “real” bike was a Diamondback Apex, which I got as a freshman in college at Kent State.

A: I really like the Giant Anthem. I’ve been on it for two years and am not planning to replace it, which is unusual for me. Its durability and ride quality are good. It’s a well-engineered bike. The whole package.

A: Vulture’s Knob. I was part of the group that helped Mark Condry build a large percentage of it. He and I are good friends.

Q: What three words describe how you feel on a bike?

Q: When you’re not riding a bike or working at Century Cycles, what do you like to do?

A: I like to spend time with my wife and family. Just relax. Read. I’m a history buff. Anything that helps me get my mind off the everyday stuff.

A: A beer brewed by a guy I grew up with – Hoppin’ Frog Brewery’s Black & Tan. I also really like Hoppin’ Frog Brewery Boris the Crusher, a dark stout. I remember when he used to brew beer in his basement and now he has a brewery near the Goodyear blimp hangar in Akron.

A: I was in a race a long time ago and a guy passed me like I was standing still. I asked him, “when do you rest?” He said, “I rest at home.” I do the same thing now – give it everything I’ve got and no rest until I get home.

Q: What piece of advice do you try to share with customers?

A: Spend the extra now and you’ll thank yourself later. If you think you want it, you do. The only thing worse than buyer’s remorse is losing in a sprint.