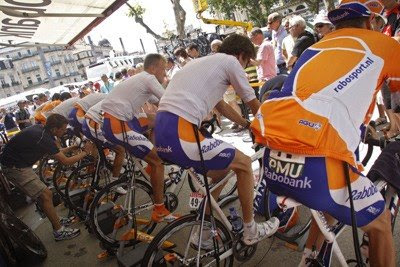 Catching up on emails while watching the Tour tonight, I came across this email from Patrick at Giant Bicycles:

During the Tour de France the Rabobank team is riding Giant road and TT bicycles, the fastest, most advanced bikes in the peloton. To help keep the team cool while riding these hot bikes, the squad is using new technology—and some tried and true tricks—to beat the heat.

Spectators who watched the Rabo boys warm up and cool down for the time trials have seen the racers wearing some special suits that appear to be hooked up to tubes. “This year we have brought some new skinsuits with us, and they cool down the body quickly,” reports Van Bommel. “The riders wear them after each stage. On top of that we have special helmets.” (Click to read more on the Giant website.)

Patrick sent this communique a few stages ago:

Road Bike Action magazine has given its readers a sneak peak of the 2010 Giant Trinity Advanced SL 0 TT bicycle. In an online feature by editor Zap Espinosa (from the setting of the Tour de France Stage Four team time trial) he writes: “It was here in Montpellier that Giant bicycles took the leap and introduced their new 2010 Trinity Advanced SL 0 TT bike. More importantly still, they not only showed off a new bike (as Specialized and Trek have also done) but they added a firm date for its availability to the public (which neither of Giant's biggest competitors Specialized (Spring 2010) or Trek (vague) have really done).” He talks at length about the features of the Giant Trinity Advanced SL and supplies several photos of the key areas of hyper-engineering on the bicycle. He also mentions how working with pro teams provides a huge benefit to the consumer market: “Perhaps most important of all, the bike you can buy in September will be better than the bike the Pros are riding today. As the saying goes (and has been proven time & time again) racing improved the breed and so what problems they have uncured and solutions they have found with the team bikes have been incorporated to the production bikes.”