The time it takes to make a difference 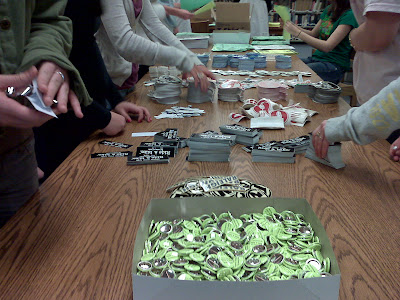 Turns out it takes just under two hours. That how long it took members of the Project Earth Environmental Club at Bay High School this afternoon to stuff 1,400 registration packets for the 2009 Bike To School Challenge sponsored by Century Cycles and Chipotle, which will start on May 4 to encourage 5th through 12th graders in Bay Schools to kick the car habit and ride their bikes instead.
That's 11 packets per minute, but you also have to throw in the assistance of one assistant principal, one math teacher, one bike store owner, one founder of a bike and skate park, a few moms, and a couple siblings.
Posted by Tracey at 10:14 PM