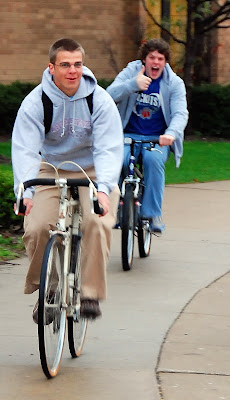 Students who register for Bay Schools Bike To School Challenge sponsored by Century Cycles and Chipotle carry a redemption card that is stamped each day they ride a bike to school. The more days they ride, the more they get - including free t-shirts and bicycle accessories from Century Cycles bicycle store in Rocky River and free burritos from Chipotle. They also qualify for Bike To School Challenge's grand prizes - two Raleigh and two Giant bicycles (one each per school, courtesy of Century Cycles, Raleigh Bicycles and Giant Bicycles) and free Chipotle burritos for a year.
Bay Schools Bike To Challenge starts on May 4, dubbed "Free Burrito Day" -- each student who registers for Bike To School Challenge and rides the first day receives a free burrito from Chipotle. It concludes on May 22 with a pancake breakfast prepared for participating students by teachers and staff, plus assemblies at each school to show the students the impact of their efforts and draw the grand prize winners' names.

Support from around the community: In addition to the Golden Sprocket Award and the prizes provided by Century Cycles and Chipotle, the program is receiving support from the community to encourage students to ride their bikes to school. The Parent Teacher Student Association at Bay Middle School and the Parent Teacher Association at Bay High School will provide free water bottles to the students as a prize. Friday, May 15, is Free Caribou Drink Day. Every student who rides that day receives a free drink voucher from Caribou Coffee. On Tuesday, May 19, Mitchell's Ice Cream will give free ice cream cones to 20 lucky students, randomly drawn from those who ride that day. On Friday, May 8, Studio VANITYLAB will give free haircuts to 25 Bay High School students, randomly drawn from those who ride that day.

Why a short bicycle ride can make a big difference: In 1969, approximately half of all students in the U.S. walked or bicycled to school. By 2001, only about 15 percent of U.S. students make the trip to school by walking or bicycling. Today, the habit of driving kids to school is so pervasive that, in some communities, parents driving their children to school represents between 20 and 30 percent of peak-hour morning traffic. (Source: Safe Routes to School: 2007 State of the States Report)

Success in 2008: Launched in 2008 as "Bay High School Bike To School Month sponsored by Century Cycles," the program was inspired by a student car boycott in 2007, when Century Cycles owner Scott Cowan approached his alma mater about encouraging more bike-riding to school. It was enthusiastically embraced by the students and faculty. Participation exceeded organizers' expectations - 543 students (66 percent of the school) registered for the program and on average 224 students per day biked to school during an unusually cold and rainy May. At its conclusion, Bay High School students rode an estimated 15,566 miles, saved $2,883 in fuel costs, and reduced carbon emissions by 14,350 pounds. Students said they rode their bikes more even after the program ended and the BHS faculty organized their own team for the MS 150, an annual 150-mile bicycle ride.