Giant Co-founder To Ride From Beijing To Shanghai

Here at Century Cycles, we're big proponents of "eating your own dog food," as the saying goes, and the same thing can be said about the folks at the largest bicycle manufacturer in the world (Giant Bicycles), according to this recent report on UrbanVelo: 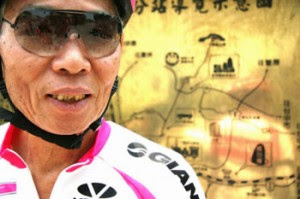 "King Liu, the 75-year-old co-founder of Giant Bicycles, will set off on May 9 to ride from Beijing to Shanghai. He aims to complete the 1,688-km trip in 20 days, though he admits it may be tough to keep up with the necessary 80km/day pace required. King Liu is no slouch, though. In 2007 he completed a 927-km ride around Taiwan in 17 days.

Read more at www.etaiwannews.com."
Posted by Kevin at 7:34 AM

Email ThisBlogThis!Share to TwitterShare to FacebookShare to Pinterest
Labels: Giant