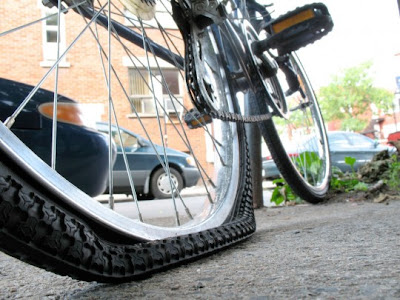 This week's Hot Deal on air pumps has spawned a lot of stories about flat tires. Those of you who ride a bunch have a bunch of stories. And then there are the people who have just one story, but it has a bunch of flats, like this rainy tale of woe from Scott Cowan:

Starting out on a self-supported two week tour from the RR store a few years ago, I left in a drizzle...and it was raining hard as I got into Bay Village....and was a torrential downpour as I entered Avon Lake. A 1/2-mile before the power plant I had a flat!! Of course it was the rear tire...which was made more difficult to change because of the HEAVY rain and all of the gear I had on my bike (not to mention it was a cold rain)!

I got it changed...and pumped it up best I could with my MINI-MINI pump...about 60 pounds (not enough for a fully loaded touring bike)! I limped to the nearest gas station to "top it off"...put the coins in the machine...and proceeded to let almost all of the air OUT (the pump was busted)! So, I again pumped it up...and proceeded on down Lake Road...low on air...and still pouring.

I was trying to make the once-a-day ferry out of Sandusky to Pelee/ Leamington Ontario...and I was now a half an hour behind...and it was still monsooning!

I busted ass without stopping into Vermilion (all the time paranoid about the rear tire)...grabbed some QUICK energy snacks (instead of eating lunch as I had planned)...and pushed on. By this time the rain had let up a bit (the roads were more like rivers), and I felt that I would just make the ferry by about 10 minutes...IF I didn't have any more issues!

Of course, 6 miles from the docks...my rear tire went flat again! All hope of making the ferry that day went out the window and I was going to be a day behind in getting to my rendezvous destination in Ludington MI with John Moss.

That day's rains, which never really ended, was the day the Cuyahoga river flooded and washed out major chunks of the towpath...a 100 year plus rain storm!

Back to flats....over the course of that trip I had a total of 7 flats! A ten years supply of flats in two weeks...!