Of Roads and Routes: A Tale of Two Cities

When I moved to Northeast Ohio a few years ago, it seems like I got to know Cleveland and the surrounding cities, towns, neighborhoods, and roads between them in a fairly consistent manner, regardless of whether I traveled by car or bike. One thing I noticed back then, and continuing to today, is that usually, the best route to get somewhere by car is also the best route to get there by bike. That is, of course, the best route by car includes freeways.

One example is my 14-mile commute from home to the shop. The quicket and most direct route by car is on Routes 91 and 303. I've spent countless hours researching alternate bike routes, both by staring at Google Maps and by actually riding my bike, trying to find a good way to avoid the major roads, and possibly incorporate more of the Bike & Hike and/or Towpath Trails. There are many alternate routes, but all of them involve more hills and more miles. I've finally resigned myself to sticking with 91 and 303 and dealing with the traffic. 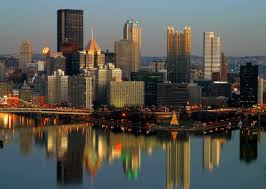 Prior to living here, I spent 15 years living in Pittsburgh, with the last six of those years as an avid cyclist. It seemed like there were certain places that I only went to by bike, and other places that I only went to by car. My knowledge the region consisted of two mental maps, a bike map and a car map, and the two eventually merged slowly over time, as I visited places by car that I only biked to before, and vice-versa, and I would have those "a-ha!" moments as I realized "That's where that is!"
Maybe it's a result of the uniquely hilly geography of Western Pennsylvania, or maybe some undefined quality of the layout of the roads and trails, but either way, the best way to get to a place by bike was almost never the same as the best way to get there by car.
On the other hand, maybe this perceived difference has nothing to do with the differing geographies of Cleveland and Pittsburgh, maybe it's just a function of how my riding styles and habits have evolved over the years.
What do you think?
Posted by Kevin at 6:57 AM