When Fort Collins-based New Belgium Brewing Co. was offered a package of urban Denver billboards, pro bono, for a pro-biking ad campaign, it quickly accepted, and assigned its agency, Denver-based Cultivator Advertising & Design to create the outdoor messages. And that's when serendipity stepped in and flooded the billboard placement Gods with good karma. The headline, "Work to Bike More," was inspired by the priorities of several New Belgium employees who may well be more passionate about cycling than about gainful employment. The billboard promotes New Belgium's Team Wonderbike, which encourages both New Belgium employees and the general public to trade in their cars for a bike. The placement above PT Motor's "Cash for Cars" sign, at I-76 and North Federal Blvd., Denver, was...oh yea...serendipitous. 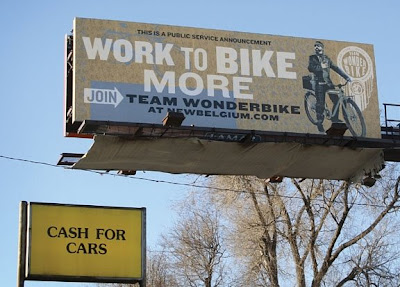 Thanks, Michelle, for the tip for this -- the 500th Century Cycles blog post!