Last Friday, the Ted Crow Challenge commenced. Today, it comes to its conclusion.

Here's how it started: Last Wednesday, The Plain Dealer's Fashion Editor, Kim Crow, wrote a column about how she thought a horribly-dressed man in the parking lot was a "homeless serial killer." Then she realized it was her own husband, Ted Crow. Ted is an avid cyclist to rides his bicycle everywhere. She relates how she implored Ted to dress better:

The next morning, as he rolled up his pant legs, I told him I could go buy him some real bike gear.

"They have all sorts of cool, high-tech outfits at Century Cycles! I could run out at lunch time!" I told him earnestly.

"Nah, I’m not an outfit kind of guy," he said, pulling on a second sweat shirt. "Besides, it leaves more money for nice Kimmy outfits."

We agreed with Kim. Century Cycles could help. We tried to prove Ted could be an outfit kind of guy (for comfort, for safety, and -- we'll admit it -- to look good). When we took The Ted Crow Challenge, we tapped a wealth of great knowledge among the Century Cycles staff. Lots of folks chimed in with ideas, like Ken in Rocky River, who recommended "definitely Pearl Izumi AmFIB Tights!"
"Something smuzzy!" said Petch. That would be this Pearl Izumi Kodiak Light Long Sleeve Jersey ($79.99). "Smuzzy" is Petch-speak for "cold-weather comfort and warmth," especially when teamed up with Pearl Izumi Phase Tights ($54.99) and Pearl Izumi Vagabond R3 shoes ($84.99).

And we know you love sweatshirts, Ted, so we have one last suggestion (or last three suggestions, since we know you like to wear these in multiples): 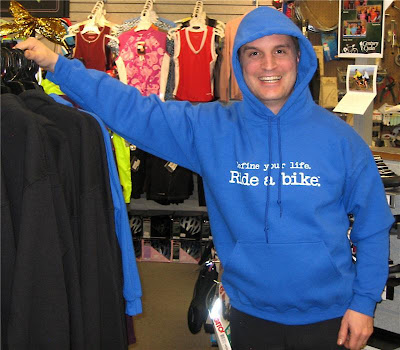 So we had a lot of fun with The Ted Crow Challenge. We hope Ted and Kim Crow did, too. Many thanks to them for being such good sports. We wish them a great holiday season, with hopefully a few good cycling outfits for Ted -- and lots of nice Kimmy outfits, too!