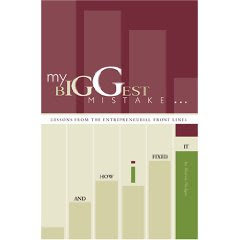 Century Cycles and its owner, Scott Cowan, are featured in "My Biggest Mistake...And How I Fixed It: Lessons From the Entrepreneurial Front Lines" by Marcia Pledger, a just-published business book that Office Max co-founder Michael Feuer calls "a must read."

In a section under the chapter on "Growth," Scott told Marcia the story about how Century Cycles lost the family feeling when it opened its fourth location in Solon back in the late 1990s, a 7,000-square foot store that was bigger than any of our other shops. He told her:

For a bicycle store, 7,000 square feet was big. It felt like a big-box retail store. It didn't have that warm, fuzzy feeling. Despite its size, it was never our best-performing store in the five years we had it before closing it. The company started feeling corporate, and I was having trouble getting to all four stores each week.

After much soul-searching, Scott and his partner at the time, Lois Moss, closed the Solon location. Century Cycles is now as you know it -- three hometown bicycle stores in Medina, Peninsula, and Rocky River, all with a very personal approach to helping people enjoy bicycling. To read the entire section on Century Cycles, as well as many other stories from successful entrepreneurs like Scott, pick up a copy of "My Biggest Mistake...."
Posted by Tracey at 7:33 PM