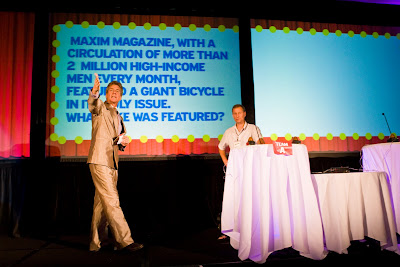 Here is our fearless leader, Scott Cowan, pondering the answer to that on-screen question in a game of "Dealer Feud" at the Giant dealer meeting last month (answer to the question: Giant TCR Advanced SL). Scott was the last dealer standing in the contest, besting everyone else in his knowledge of Giant trivia. He won the game and the grand prize -- a 2009 Giant Defy Advanced 1 road bike, a top-of-the-line bike with a composite fiber frame, Shimano Duro Ace and Ultegra components, and a Mavic Ksyrium wheelset. Yeah. We know. He's the luckiest damn guy on the planet.

Patrick Van Horne (at left), Giant's corporate communications director, hosted the game as well as the meeting in Park City, Utah, for about 120 Giant dealers from around the country. While there, Scott got a chance to ride the 2009 Giant TCR Advanced 2, a very cool carbon bike, on a 15 mile road ride in and around Park City. He said, "Awesome place to ride a bike! I also really enjoyed riding the "New Hybrid" electric assist bike they are beta testing...it worked perfectly!"

We're impressed with Giant's mountain bikes, too. Stay tuned for more details -- we'll be reporting from Interbike, the big bike trade show in Las Vegas, in just two weeks, with all the latest and greatest news from all our manufacturers.
Posted by Tracey at 12:21 PM

Email ThisBlogThis!Share to TwitterShare to FacebookShare to Pinterest
Labels: Giant