Scott, Petch, Krista, and I are leaving today for Interbike, the big bicycle industry trade show in Las Vegas, and we'll be reporting back to blog on the latest and greatest products for 2009. In the meantime, let's look back on the 2008 bikes that Bicycling magazine's editors gave "Editor's Choice" awards -- we're happy to say Century Cycles carries a bike in every category they rated. 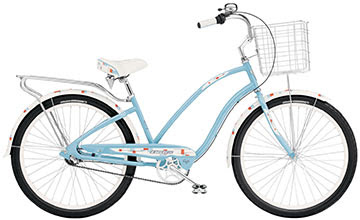 BEST CRUISER BIKE: Electra Gigi ($530; above). They said: Testers raved about the "way cute" and "very art deco" Gigi; comments ranged from "even though it's $100 more than the others, I'd pay it" to "I fell in love." Furthermore, "the ride matches the style" -- the bike "shimmied up a short rocky rise when we decided to cross some railroad tracks on a whim," and "the totally relaxed and easy riding position is perfectly dialed." In addition to a lovely sounding bell, you also gete a large basket and a rear rack that "looks like something transplanted from a '50s Chevy Bel Air. Bonus: It's functional!" (In stock at Century Cycles) 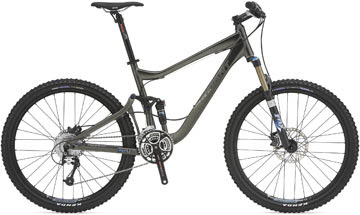 BEST TRAIL BIKE: Giant Trance X1 ($2,300; above). They said: This category was a knock-down, drag-out fight to the bitter end, but Giant's new Trance X1 took the crown with the best overall package. It covers a wide spectrum of trail situations; one rider called it "the easiest to go fast on, and that includes climbing as well as descending." The Maestro suspension delivers firm, effective-pedaling feel and suppleness, yet a measure of control over the bumps that balanced nicely wit hthe FOX F120RL fork. The goodness didn't stop at the suspension; handling is: "as beautifully neutral as can be" and "totally bomb-proof." Top that off with a great-performing component package, and the Trnace X1 delivers the knockout punch. (No longer in stock at Century Cycles. Our plan is to bring in some demo bikes along these lines for 2009. Stay tuned.) 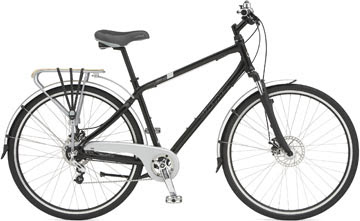 BEST COMMUTER BIKE (RUNNER-UP): Giant Tran Send EX ($760; above). They said: Testers raved "best shifting," "fast rolling" 700c wheels, and "sharp-stopping" disc brakes. (Unfortunately, none of the EX or LX are in stock. We'll try hard to get more in 2009.) 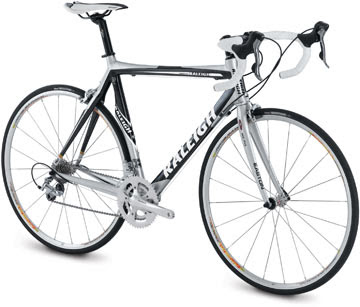 BEST RECREATIONAL ROAD BIKE (RUNNER-UP): Raleigh Competition ($1,975; above). They said: The ride "nicely balanced lateral stiffness and comfort." Said another tester, "This is a great bike for long days in the saddle." (Also no longer in stock, but will be on our radar for 2009 inventory.)


BEST ENTHUSIAST ROAD BIKE (RUNNER-UP): Giant TCR C1 ($3,100; not pictured). They said: The responsive frame won approval from testers, and one rider said "the sporty and fast bike made me want to ride hard." (In their August 2008 issue, Bicycling named the Giant TCR Advanced Team their pick for best lightweight climbing bike, because it delivers climbing bliss and yet also "descends impeccably," which they credit to the seatmast, "because every rider steers with his hips as well as his hands.")
Posted by Tracey at 8:17 AM