2.5-mile section of Towpath Trail is closed on weekdays until late January 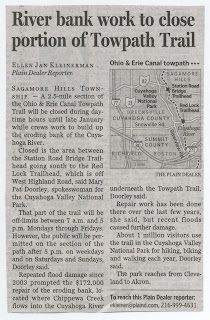 A 2.5-mile section of the Towpath Trail will be closed during daytime hours until late January. Closed is the area between Station Road Bridge Trailhead going south to the Red Lock Trailhead, which is off West Highland Road, north of Century Cycles in Peninsula. It will be off-limits between 7 a.m. and 5 p.m. Mondays through Fridays until late January. It will be open to the public after 5 p.m. on weekdays and on Saturdays and Sundays. Crews are working to build up the eroding bank of the Cuyahoga River, a $172,000 repair needed after repeated flood damage since 2003.